The Stream is a weird place. Your Facebook feed, for example, is a series of posts by various people that in some ways resembles a forum, but in other ways it’s not at all like a forum.  When you post something to Facebook, there’s not an explicit prompt you are responding to, which seems non-problematic when you are posting a cool new video you like, but a bit weirder when you are posting random articles.

A recent Jay Rosen tweet thread got me thinking about this a bit more deeply. Rosen suggests that the reason that fake news spiked before the election was demand-driven: many Republican voters were feeling uneasy about voting for Trump, and articles where Hillary was knocking off FBI agents and funding ISIS helped them feel better about that:

This is interesting, because the place where I became obsessed with the fake news phenomenon was in the primary, when a lot of Sanders supporters I respected and admired for their intelligence suddenly were posting bizarre vote-rigging stories.

As one example, the Inquistr story Election Fraud Study Points To Rigged Democratic Primary Against Bernie Sanders [Video] was repeatedly in my feed, with angry references to how this proved they had been right all along — Bernie was actually winning. The primary had been stolen!

The “study” the page linked was referred to as a “Stanford Study”,  a claim which took 60 seconds to debunk. It was the work of a current Stanford student of psychology. No background in politics or polling. No Stanford appointment. And the study itself was just a paper, written and shared via Google Drive — it hadn’t been peer-reviewed or even designed above and beyond what one might do for a blog post.  When you dug into the paper, there was nothing there — the computation of some effect sizes between states with paper trails and those without, and language which indicated that the author might not in fact have understood how exit polls work, or have been aware of the shift in demographic support for Clinton between 2008 and 2016. (In fact, in this respect there was an error that would disqualify it from ever being taken seriously).

I didn’t expect most of my friends would get the math, but even so, without the call to authority, and considering the major barriers to rigging an election, one would assume people wouldn’t re-share it. But reshare it they did. And quite a lot.

And this is where I think Rosen’s point is interesting. If you think about the Stream, with it’s lack of explicit prompts, how does one know what to share? One thought is that as you go through your stream you are doing something like shopping — you’re explicitly in the market for something. And very often that something is a rebuttal to an implied argument that is giving you some cognitive dissonance.

For the Trump supporters, the dissonance was that Trump was unqualified and racist and Hillary was just (in their minds) corrupt. But was she corrupt enough? And if not, how could they vote for him? Changing Clinton to a murdering ISIS follower allowed them to follow their gut, which really wanted to vote for Trump. It gave their gut the evidence it needed to rule the day.

For the more militant Sanders conspiracists, the dissonance was between the results they felt Sanders should have and the ones that he got. People’s gut had told them Sanders would be broadly popular, but the reality was that he was not quite popular enough. On the verge of having to accept that, Facebook threw out a lifeline for the gut: the election was rigged. Stanford scientists had proved it.

If you go through a few of the public (e.g. share to all) posts on this, which you can do with this search, you’ll find something really interesting — so many of the comments people write when sharing the piece are of the type “I knew it! I knew it!”. It’s the sort of reaction someone has when they are struggling to maintain belief in the face of cognitive dissonance and suddenly stumble on a lifeline. 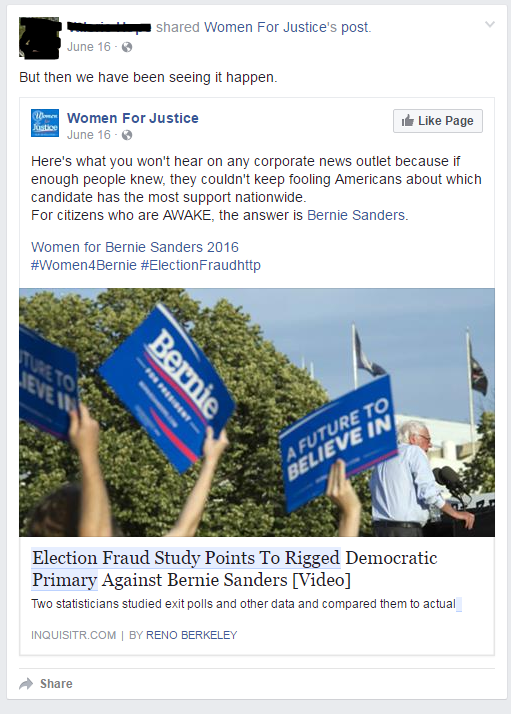 (Note, the post above is a public post (e.g. meant to be shared to the world). You can’t see, and shouldn’t share private/friends posts with that search. And even though the post is public I’m blacking out the person’s name out of consideration)

This isn’t to say that all this is innocent in the least. The “Stanford Study” that wasn’t actually a study or from Stanford was shared at least a 100,000 times via different sites shared on Facebook, including by HNN (share count of their version: 82,000), which changed the headline to the more zippy “Odds Hillary Won Without Widespread Fraud: 1 in 77 Billion Says Berkeley, Stanford Studies”. (Spoiler alert: the Berkeley study wasn’t from Berkeley either). And it got a big assist from state-sponsored entities like the Russian-owned RT News in this episode of Redacted Tonight, which was viewed approximately 125,000 times on YouTube:

(That’s YouTube views, BTW, which are serious stuff — you have to sit down and watch a significant percentage of it before the view will register).

The RT segment ups the ante, really highlighting the Stanford name, to much laughs. It’s a study out of a little community college called Stanford, the host jokes (again, it’s not). It’s getting to the point it’s really embarrassing, the host says, how people won’t admit it was rigged. How much evidence do you need?

There’s a similar story in the past couple days with a Breitbart story being shared that passed around a ludicrous map with a misleading headline about Trump winning the popular vote (in the heartland).

Now any person with half a brain can see how ridiculous this map is — if they stop to look at it. And any person that can stop to parse a sentence can see the gymnastics required here to claim this victory.

The people reposting this are not stupid. But crucially, they don’t stop to think about it. They see and they click, I think, because they know the moment they see this that this is a rebuttal they have been in the market for. They don’t need to evaluate it, because this is precisely what they have been looking for.

This is a bit rambling, but what I mean to say is I think Rosen is onto something here about the nature of the supply-side.  I’m starting to think of feed skimming as a sort of shopping experience, where you know the ten sorts of things that you are looking for this week. Some paper towels, a new sponge to replace the ratty old one, and a rebuttal to your snobby cousin who posted that article that made you feel for twenty seconds that you might be wrong about something. Just what I was looking for!

As I’ve said before, this doesn’t mean that the news only confirmed what you thought already. In fact, quite the opposite: this process, over time, can pull you and your friends deeper and deeper into alternate realities, based on well-known cognitive mechanisms.  But thinking of this process as not so much one of discovery as rebuttal shopping — often brought on by cognitive dissonance — is useful at the moment, and I thank Jay Rosen for that.