I’m playing with this idea of Facebook posting as “rebuttal shopping”. The idea is that a lot of stuff that goes viral on Facebook is posted as an implicit rebuttal to arguments that the poster feels are being levied against their position. This stuff tends to go viral on Facebook because the minute the Facebook user sees the headline they know this is something they need, an answer to a question or criticism that irks them.

Maybe the idea holds together and maybe it doesn’t. But I’ll occassionally be looking at new things that are trending on Facebook and seeing how they do or don’t fit that pattern.

Today in rebuttal shopping we have this, on Trump’s IQ: 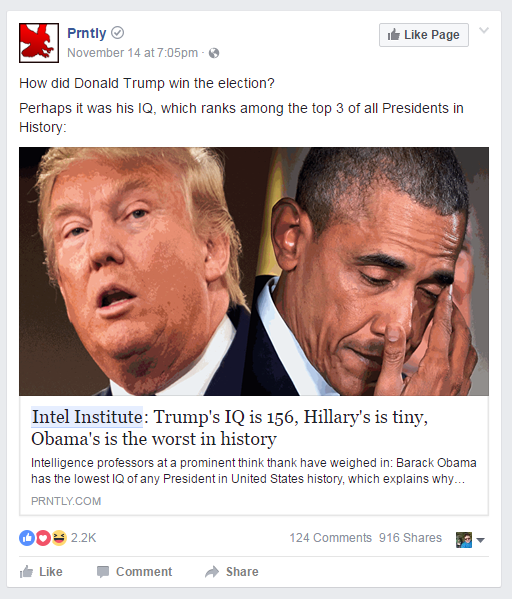 I don’t think I have to prove this fake: there is no official record of Presidential IQ scores throughout history, and of course intelligence tests didn’t become common until well into the 20th century. Outside that, we even have the card description here, which references a “think thank” that proposed this, and the weird phrase “Intelligence professors”. But if you want to click through, it is a blog post on Prntly.com that references a “report” that turns out to be someone talking on a forum.

Number of shares on this are not groundbreaking, but clearly in viral territory for something posted two days ago: 24,836 shares.

One of the comments on it, liked 59 times, seem to support the rebuttal shopping idea:

“Democrats love to talk about IQ’s. Well they won’t be talking about Trumps. They thought Obama was the smartest president ever.”

However, a lot of the other comments rant about unrelated things, so maybe comments aren’t the best result here.

This IQ issue seems to be a ongoing thing. A satirical article on Empire News last year claiming that Obama scored the lowest on an IQ test of any president in history garnered over 30,000 shares, and a chain letter hoax in the early 2000s had George W. Bush as the the lowest in history.

Where does this leave “rebuttal shopping”? I’m not sure. The new Trump fake news seems to follow the rebuttal pattern, as does the Obama story. The Bush story confirms something that wasn’t much disputed at the time, however, and looks more like shopping for confirmation than rebuttal. It certainly is not resolving any cognitive dissonance.

We’ll play with the idea a few more days and see what it brings to the fore.