Let’s continue to look at how Facebook has harmed public discourse, because I’m getting increasingly worried that once Facebook blocks fake news people will say problem solved. And really, the problem is not even close to solved.

One of Facebook’s oldest features is the “wall” although we seldom call it that anymore. The wall in Facebook is your personal space, a place to express yourself, and occasionally a place for people to post messages to you. If you click on a person’s name in Facebook you see their wall. It’s the sum total of things they have posted to Facebook, along with the things that have been posted to them.

The wall (and Facebook itself) used to be a place for you to express non-newsy parts of yourself. You’d share status updates, various pictures of yourself with red solo cups, and links to funny videos or cool music. The wall was really an expression of you, the front page of your digital identity.  It was the collection of things that made you who you are, the place where you showed various photos of your feet at the beach and expressed your undying love of Yacht Rock.

Compare that to something like Delicious bookmarks, which is a crime against the eyes, but uses another metaphor:

If you take this article that is shown above, for example, on the subject of innovation, I have literally no idea whether Brian agrees or disagrees with it. In fact, knowing Brian’s personal opinion of talk about innovation, my guess is that this paper probably doesn’t align all that well with his views, but is interesting and informative enough that it is worth a read, so he’s bookmarked it.

Now let’s take a look at my “wall” in Facebook: 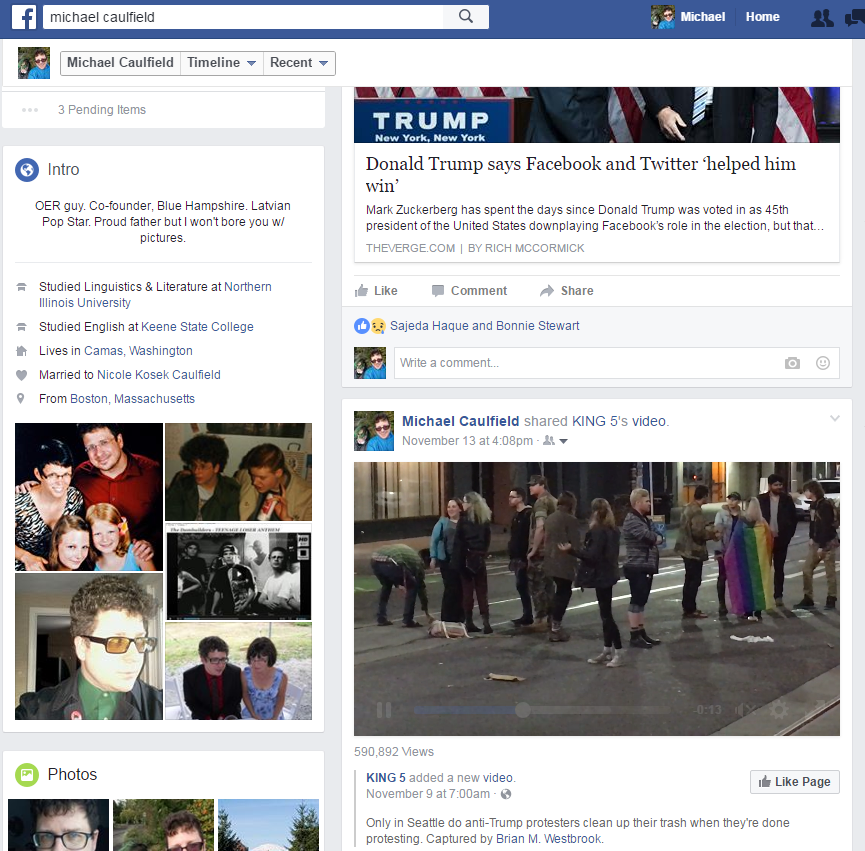 The thing about my wall is you can tell at a glance who I am. It’s my digital identity, and I — like most others — curate it as such. These aren’t just useful articles and videos. They are expressions of what I believe.

And this, I think, is a too unremarked turn in social media, because it has dramatic impact on what gets shared. If I can only share stuff that more or less agree with, that has profound impact of the flow of information through the network. Likewise, I’m unlikely to share things that aren’t core to my identity — for instance, meeting minutes from the last town meeting. I’m more likely to share things I’m passionate about.

I know some people will read this and say — ha, ha, no, I share all sorts of things. I am not bubbled!

You might think that is true, but in practice I bet it is usually not. Look at the top three posts on your Facebook feed. Are the viewpoints they express generally in line with yours? (And I don’t mean exactly, I mean generally) More importantly, are they core to your passions? Have you shared any boring but useful information in the last 24 hours?

My guess is you haven’t. You might very well do that occasionally, but it is not your daily practice. It is swimming upstream, against the bias of the interface and the over-arching metaphor of Facebook’s wall.

And this is a big problem. If you grew up in the 1980’s you can think of Facebook as a jean jacket or goth trenchcoat on which you can put a number of pins and patches:

From blog We Are Reckless. Couldn’t find one CC-licensed, can someone make one?

Together these pins and patches represent who you are. And that’s great. People like to express themselves. But when you do that with politics it looks like this:

From Terapeak. Still available for sale!

Which is, again, great as expression. Peace is good. We should bomb less. And who likes fat cats anyways? So, awesome, great, wonderful.

But are a series of jacket buttons and patches really our best source for news?

This mixing of core identity with an information system has direct effects on what we share and see. We’ve talked about how Facebook’s interface encourages sharing without reading, but just as important is this piece of the problem — that we subconsciously want all news we share to show unambiguously who we are.  And while it’s OK that we don’t put buttons that we’re ambivalent about on our jackets, the world depends on us getting news and information that we are ambivalent about. In fact, that’s often the most important news.

I jokingly say that Facebook built a platform for distributing party selfies, turned it into a news source, and destroyed the world. That’s hyperbole, of course. But the first two points of that — that Facebook turned an identity platform into a news source — that’s absolutely true. It’s only the ultimate impact of that that is in doubt, and we’re increasingly seeing that impact has been more negative than we ever imagined.