Some years ago, Dan Meyer pioneered and promoted a structure of math lessons based on three “acts” that fit together in a way that gave lessons a momentum and rhythm in the way that three act structure in film gives films (or TV shows or whatever) a structure and a rhythm. The acts as I understand them are:

I’ve been trying to explain how we structure our lessons in Digipo, and while this may be a slight (or substantial?) perversion of the Three Act structure I feel like we have three acts as well.

This is very raw, and nascent. I haven’t refined the terms here, and maybe this doesn’t work. Yadda yadda yadda. But let’s give this a try.

We take an artifact on as a case, and run it through our fact-checking techniques. So for example, we can take this picture of Carl Sagan that appeared after Elon Musk launched a Tesla into space as a promotional stunt. 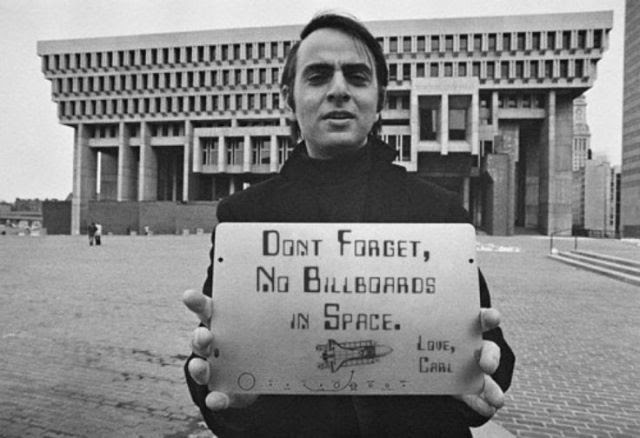 It’s like Carl Sagan was a prophet, foreseeing the commercialization of space from the 1970s.

So is it true? We put the students immediately on it, and see what they come up with.

After giving the students five or so minutes to work this out. We walk around the classroom and have discussions about their individual strategies. For the students that finish early we come up with some additional detail they can track down.

Then we have the students share their methods with the class, and show our solution, which is usually (but not always) a bit more efficient than the student’s methods.

In this case the solution starts with a reverse image search, which immediately suggests this is the Pioneer Plaque that has been altered:

We see there is another image, widely disseminated of Sagan holding up this Pioneer Plaque. It’s out there earlier than the other version. If you read up on the Pioneer Plaque even briefly you realize this was a major effort of Sagan’s — this message from earth to space aliens that attempted to communicate using a language an alien culture might be able to decipher.

If you want to get real CSI on it, you can even note that the depiction of the solar system on the bottom of the Pioneer Plaque was not even erased to make the new one:

Maybe I watch too many police procedurals. But the way procedurals in a long arc series work is often that there is a small case that comes across the desk of a detective. Someone commited suicide, or wandered out into traffic. Made a public disturbance. Broke into an office. The initial case is solved but a larger story is uncovered. The first act gives you the what. Maybe the how. But Act Two is about the why.

The larger story for us is usually the structural issues or the social impact. In this case there’s a number of stories we can pursue, but here’s one I particularly like.

Was it originally humor? Does it matter? The original image seems to have been a photoshop that has been around since at least 2012, and was recently posted to an anti-Elon Musk subreddit on Reddit:

Have students look at the page and decide whether the people who originally shared this knew it was fake or not. The signals on the page make it pretty clear people saw it as a Photoshop job and were using it as a joke with a point.

So why did it get shared as real? Get your students to think about how meaning and context changes when a photo or quote moves from one subculture to another. What would have been different about the audience and context on that subreddit (knowledge of Sagan, knowledge of the ‘OP’ — the ‘original poster’ on Reddit, the way that comments stay with the photo, a common culture of joking through photoshopping) versus the other contexts (Instagram, Twitter, Facebook) to which it propagated?

There are some other questions I put in the guide to this. You could look at the phenomenon of “sign-holding” in social media, and how this technique, which is meant to prove authenticity, is perverted by Photoshopping. You could talk about this compulsion to attach our current thoughts to dead figures of the past, via the fake quotes that are ever popular. In each of these cases, the question is “What is the larger social, psychological, and political situation that drives this phenomenon?”

My experience is that doing this for Act Two after a very analytical and dry Act One just works in some magical way that is hard to describe. The initial investigation grounded them in a context and got them to think analytically, and now they bring that into the larger conversation.

I’ll also say that pedagogically you can’t do one without the other. The second act imbues the first act with a social meaning that straight fact-checking and source-verification lacks.

In Digipo we have three goals for our program. Students will be able to:

That last part has been key for us from the beginning. So you see a mistake online, or someone being harrassed, or learn about the ways in which trolling is used to silence people. What do you do?

In Act Three, with the students fresh from talking about the larger issues, we focus on both small and large interventions for these problems.

In this case we ask the students to imagine that this has been posted by a friend who seems to think it is real. Do you correct them? Do you do it publicly? Through DM?

Do you maybe do it subtly, pretending that they know that the picture is a photoshop job. “Cool picture! Have you ever seen the original?” along with a link to the original.

Maybe you reshare it yourself, but provide the context “I know this is fake, but it’s how I feel right now.” What do they think would work best? Or does it even matter? Why or why not?

Interventions aren’t always personal or technological. We can talk about that a bit more with some other examples, but sometimes there’s a policy discussion that has to happen. Sometimes it’s a discussion about what a better platform interface might look like — you can have your students design platform UI solutions to an issue, to think through the way in which a UI creates sometimes harmful behavior.

But there’s the sequence:

I admit this is clumsy and a bit bloated compared to Dan’s work. But I think there’s something here we can get to.

Let’s take a few quick examples and sketch out how they might work.

In the Now is a hip (or trying to be hip) video channel for politically engaged 20-somethings available on multiple platforms. Here’s a promo for it:

These examples only scratch the surface of the things we want to talk about. Clickbait, adtech, bots, othering, tribalism, identity, trust, journalistic integrity  — all these things can make a good Act Two, and if you look through Four Moves, we have the activities to support them.

Anyway — this is a work in progress, but gets at both the rhythm of the class sessions and the three necessary elements of online media literacy (skills, structural perspective, action for change). Curious to see what people think. I’ll eventually take a better pass at laying this all out.

3 thoughts on “The Three Acts of Online Media Literacy Lessons: A First Pass”