When I was at Keene State College, we had a student life group that was heavily into environmentalism, and lots of extra-curricular activities and student learning were structured around making the local environment better. As an example, we’d have a clean up day each year where the students would pick a target — a local river, or park, etc — and clean up the area. You’d start by picking up trash but eventually end up pulling a defunct TV set out of a stream somewhere because people are awful.

As we look at our broken information environment, I wonder if this is a way we can think about student engagement. Take for example this Google search: 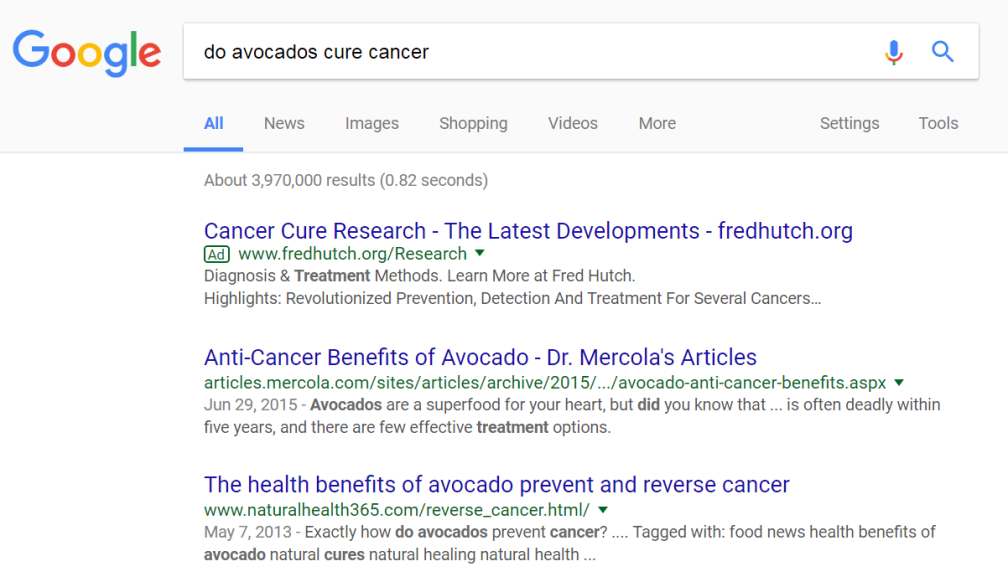 Now, I love avocados. I do. And they have health benefits. But Dr. Mercola and Natural Health 365 are the equivalent of a broken TV set sitting in your public reservoir. The fact that they top this search is criminal. Both these sites mix the hyping of small inconclusive studies with the sale of “health products”.

While it may not be all that harmful to convince people to put more faith in eating avocados than they really should, these sites lure readers into a web of anti-science conspiracy thinking which has real impacts. As an example, the Mercola site is implicated in originating a rumor that the Swine Flu vaccine was dangerous:

In her book On Immunity, an examination of vaccination fears, Eula Biss wrote about Mercola as one of the originating disinformation agents. She traced a persistent online rumor that the vaccine for H1N1, otherwise known as the swine flu, contained a chemical called squalene to an article written by Mercola, “Squalene: The Swine Flu Vaccine’s Dirty Little Secret Exposed.”

“The reproductions of Mercola’s article that proliferated across the Web early in the pandemic were then, and still remain, uncorrected. But by the time I traced them to the version on his website in the fall of 2009, the original article already included a correction in the header clarifying that none of the H1N1 vaccines distributed in the United States contained squalene. This was not a minor point of correction, but the article had gone viral before being corrected,” Biss wrote. “Like a virus, it had replicated itself repeatedly, overwhelming more credible information about the vaccine.”

Dissuading people from taking a needed vaccine (especially those most at risk) has deadly consequences. While the virus was milder than anticipated, it was also much more viral. Sixty million people contracted it. Over 270,000 people were hospitalized with H1N1 in the U.S. and more than 12,000 people died.

And yet this source is at the top of Google’s search results.

This isn’t an isolated case. Until recently, if you hit the “I’m Feeling Lucky” button on Google the question “Did the Holocaust happen?” led you to Stormfront, a white supremacist site sporting a page explaining why the Holocaust was a myth. “What happened to dinosaurs?” produced a creationist site in Google Snippets.

And of course, from the political fringe we have this gem, in response to “presidents in the Ku Klux Klan”

Protip: None of these presidents are known Ku Klux Klan members.

Again, these issues are not harmless. People forgo treatments that could save them, or make them less sick. People fear threats that are minor (Islamic terrorism in Topeka, clown killings, Ebola in America) while not believing in things that are real threats (climate change, declining productivity gains, painkiller addiction). To some extent the bad information environment online is a result of our bad information environment elsewhere. But unlike the nightly news, the web is still a collectively maintained and produced environment. We can clean it up. We can pull those TVs and shopping carts and plastic bags out of our shared information streams and Google results.

We can actually change things, one search result at a time. We can provide better answers, more balanced answers, more useful answers. We can stem the erosion of faith in science by selecting sources more carefully than the latest clickbait. We can debunk the scams and fakes that litter people’s feeds.

I started on my own project somewhat recently (Digipo), and was amazed by how easy it was — if you targeted a particular phrasing of a question — to have an impact on search results. Here’s a more balanced treatment of music and IQ that some WSU neuroscience students wrote up, making it’s way to the top Google results:

What I love about this is that the third result is *also* student work, in this case from a common course blog by a student at Penn State. Imagine a world where all our students wrote different variations on questions like this, and fed them into wiki-like communities that carried forward the research and maintained it? Could we clean up our information environment? Save lives? Make for more enlightened discourse?

And if we can do that, why aren’t we doing that?

9 thoughts on “A Call to Info-Environmentalism”