I’ve been addicted to fact-checking for a while. Ten or fifteen years, maybe? Longer? When I see something in any of my feeds that doesn’t smell quite right, I have to hold myself back from checking it. It’s just somehow one of those enjoyable “flow” activities for me.

That said, I never really watch what I do when I do it. Now that we’re putting together a student fact-checking project, I thought I might pay closer attention. I’m fully aware the novice/expert distinction here means that how I approach this may not be accessible to students, but you have to start somewhere.

So here’s today’s installment, because it demonstrates how to solve a fact-checking problem you often make multiple passes through Google.

So this letter shows up in my feed. It’s Richard Nixon telling Donald Trump if he ever runs for office, he’ll do well. It’s dated 1987. 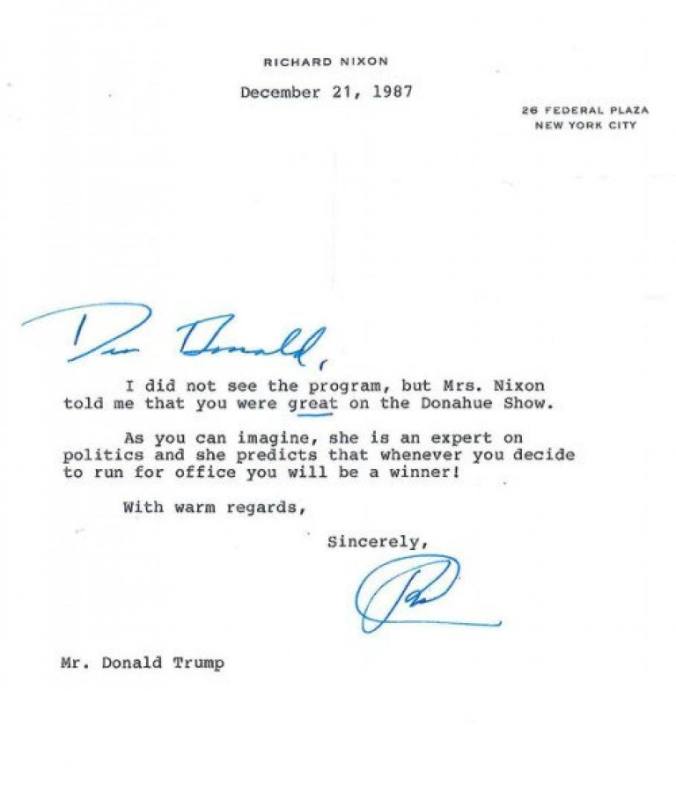 Now I say it “doesn’t smell right” — but actually that’s not true at all. This looks to me exactly like a letter that Nixon might have written, and certainly one that Trump would have kept (and therefore one that would have survived). So, actually, it smells great!

What makes me check it is not suspicion, really, but the fact its exactly the sort of letter that’s bound to go viral. Because that’s true, that means there’s also a good incentive for someone to make it up. If there’s incentive to make it up, then we should check to make sure that’s not what happened here.

So that’s rule one. When you find yourself looking at something that feels just perfect, check it. So let’s find out — is this letter really authentic?

I’m a big fan of reverse image search for things like this. A lot of times it fails, but when it succeeds it brings you straight to the right evidence. So I try it out with this image, but get a dead end. 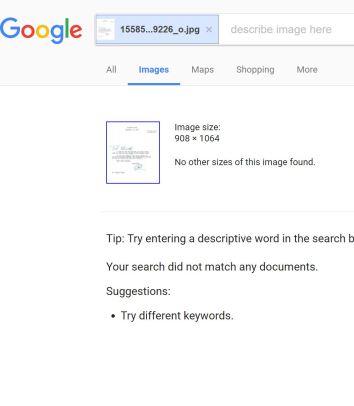 It’s the NY Daily News, which is OK as things go as a source. But there’s a problem. The letter I saw said ‘1987’ whereas the NY Daily News here says 1981. And there’s no scanned picture here. So which is wrong on the date, the article or the document?

Here I make a quick detour, and check Wikipedia to see if the Donahue show was even on in 1987. If it wasn’t, then the picture of the letter is probably a fake. But alas, Donahue continued way past 1987, so both dates are possible:

We now go back to the NY Daily News article and skim it. We need another search term that is going to be specific to this image/letter. The article mentions the name of the book that the letter appeared in, a biography of Trump called “Never Enough” I put the phrase “Never Enough” into my image search, on the theory that any reliable article showing the letter will mention the source, and bingo: 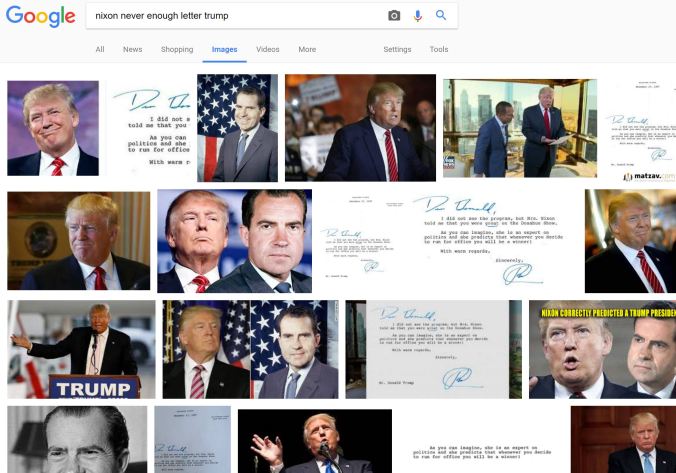 I see six different versions of the letter here. I hover over each of them to see the source, looking for something better than the NY Daily News: Brietbart (nope), Conservative Post (nope),  NY Times (yes!). 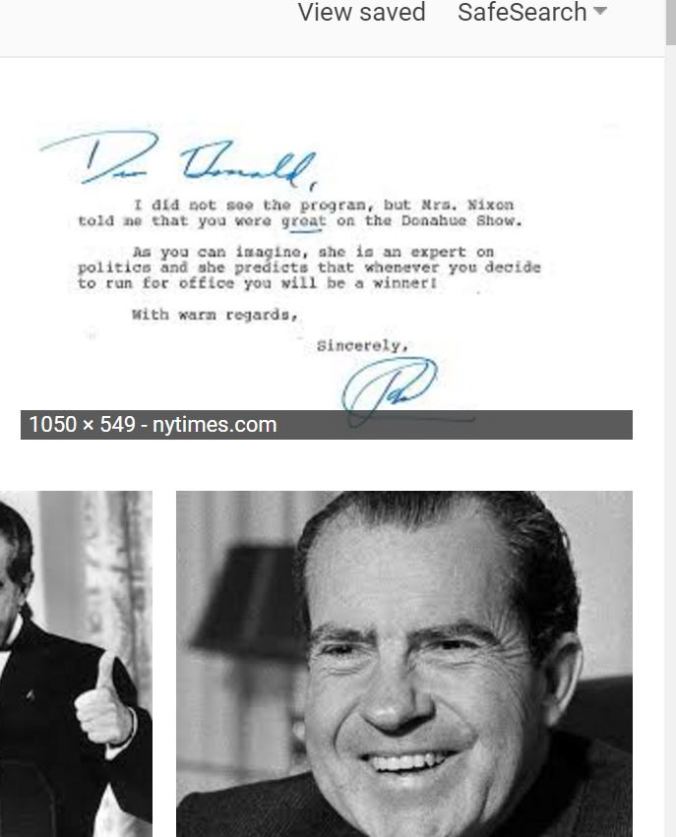 Why am I excited about the New York Times? Because I’m a godless liberal?

No, I’m excited because the NY Times pays a price for getting things like this wrong, whereas the Breitbarts of the world suffer no consequences for error. That’s the main difference. The same would be true of the Wall Street Journal, which leans right, or USA Today. which is straight down the middle. We’re not looking for an ideology match here. We’re looking for someone with incentives to not publish hoaxes.

I go there and find that, unlike the NY Daily News, the NY Times has the year correctly, and cites the letter as well as includes it. 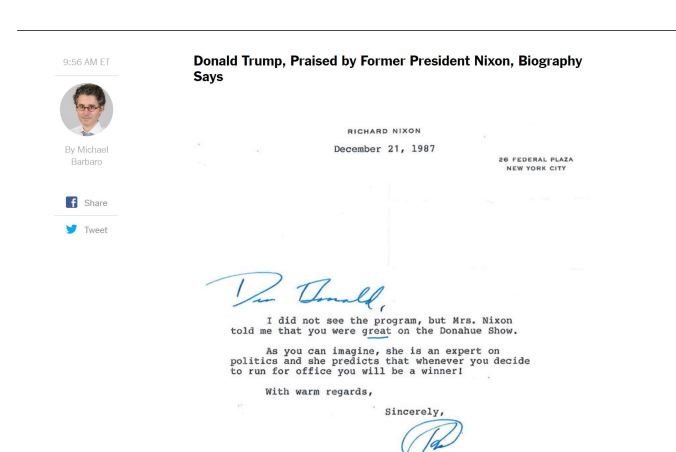 The story below it confirms the date and the source. So we’re done, for the moment. We could certainly get past our 95% confidence in this letter — bring it up to 98% or so with more checking. We could go look at the actual book that published it for example.

But at this point it’s diminishing returns. The New York Times is still showing the letter after having it up for months, and there’s no embarrassed retraction under it. I’m confident enough to re-share.

I call this process “levering up” because it reminds me of when I was a kid in a rural town and we used to try to move these huge boulders. You’d get a decent-sized stick under the rock, and lever it up so that you could get the next, larger stick under it, and so on. Finally you’d get the monster of a stick you wanted under it and the leverage and stick and position would seem just right, and the rock would move almost effortlessly. But you got there only by this recursive process of small gains.

That’s what you do with these Google searches. A search reveals a document that is not quite right, but has another search term that gets you another document that is better. Even with the novice/expert distinction, I think this is one skill/understanding all students need.

Incidentally — the whole process here, end to end was about five minutes, of which three were capturing and saving screenshots. So about two minutes of work. Certainly something people could afford to do a couple times a day with content they retweet or repost.

One thought on “Levering Up a Google Search”