This is a short note — the second I suppose — that follows up on a conversation I had yesterday with George Siemens and David Kernohan.

In that conversation I stated I had a technique of using the web that helped to overcome bias rather than push us further back into it. It has, at the moment, the unfortunate name of “Document Decomposition” which is probably worse than what I used to call it (“Idea Mining”). I’m not much of a brander.

But the point of the technique is this: when you come to a document on the web, suspend your disagreement with the argument, and instead loot it for neat insights, facts, and figures.

For example, there’s an article out there right now that makes the case that Clinton’s focus on Trump’s instability is costing her post-election success at coalition building. Even as I type those words I can barely restrain myself from going on a rant because this gets the modern post-Tea Party political climate so WRONG WRONG WRONG.

If you’re a human with a brain and a passion for something, you know this feeling. I feel like a middle schooler being held back from a fight. I want to jump into the article and destroy this premise, mentally rebut every argument, lay waste to the suggestion. And I can absolutely do that.

And maybe the argument is wrong. Maybe I’m right. But there is near-to-zero use (apart from fun bursts of dopamine and adrenaline) of reading the article that way. If I had my old political blog and I was influential in that way, perhaps. But, to me personally, reading the article that way will be a waste of time. I already know I will come out of the article exactly the same way I came into it, except perhaps with more neurons ossified and locked into their current configurations.

Worse, because I disagree with the rhetorical point of the article, I will only store away those facts and insights that support my point, and ignore those that don’t. Over time my mind becomes a repository of only the facts that support my worldview, and my views harden.

So what can you do? My argument is you can choose to ignore the higher argument and loot the article for facts, figures, patterns, and theoretical lenses. Understand the author’s point, but don’t treat it as a debate. The truth is if you can get past the urge to debate here, this person knows stuff you don’t, and your prime job here should be to learn it.

So I decompose the document into useful facts. Here’s a bunch of cards I made going through it. 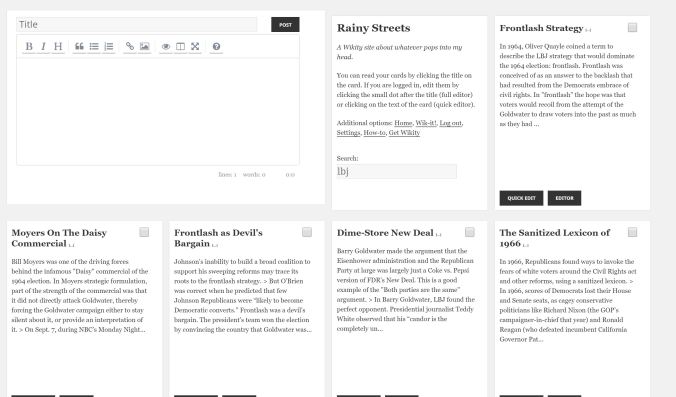 Each card is a blockquoted piece of text from the article with a title given by me to the idea or incident it represents. Above the blockquote, if I have time, I put a brief summary of the blockquote and maybe a note of why it is significant. Here’s  the five cards I made from the article that was so wrong wrong wrong., each of them pulled from something the author of that article either taught me or explained well enough that I wanted to capture it:

But, you say, most of these cards undermine my belief that building “mandates” is largely mythology. Yeah, they do. But they are interesting facts, points, and ways of looking at things, so I want these cards in my personal wiki. It’s going to make it richer, and more interconnected.

After I write up the cards (it doesn’t take much longer than reading the article, really — maybe about three times the time of a “straight” read) I then try to find connections for them.

I type in 1966, and find that’s not only the year of the backlash against the Great Society, but, according to a card I made out of another article, it’s also the peak of NASA funding: it was all downhill from there. So I add a note at the bottom of the card: 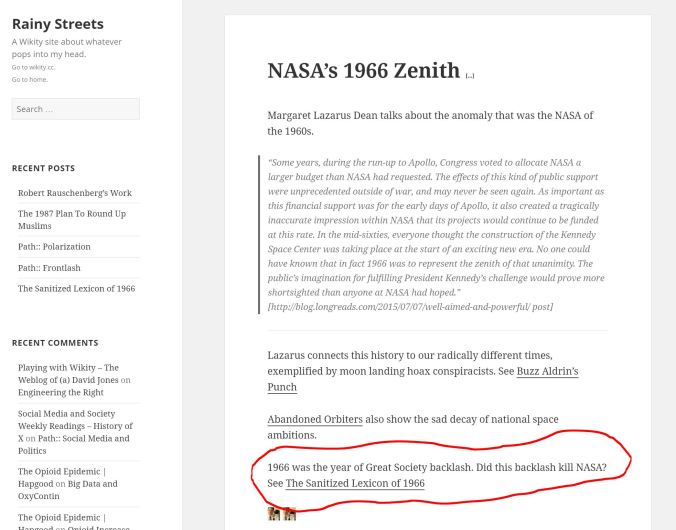 In the comment I link the NASA article to the article about the 1966 backlash. And I make a note of a question this raises or me — to what extent was NASA a victim of Great Society backlash? I have no idea, but it’s interesting to think about. I’ll research it later.

Trying to find something to link to “Dime-Store New Deal” I type in polarization, and I find a card about how in 1960 only 5% of people would have had issues with a child of their’s marrying someone from the other party; by 2010, that percentage had risen to a third.

That statistic is one I’ve used before to talk about the rise of “lifestyle politics”, but Dime-Store New Deal reminds me that in 1960, according to some people, both parties were very much the same. So I write a note:

I’ve grown to like finding these things, because a card that can link to counter-evidence is just so much more interesting than a card that doesn’t. You’re building out and connecting your library of ideas. And just as Milton Friedman surely had copies of Marxist theory in his library, you, too, are an adult, and your library should have a wide array of cards which argue against what you believe. You need to keep them there, linked and ready to remind you of reasons you might not be right.

I’m not going to rehash The Garden and the Stream, though I will say that with passing time I think that particular post has become more accessible to people who are watching the Facebook-fueled implosion of our political discourse. As I said there:

I am going to make the argument that the predominant form of the social web — that amalgam of blogging, Twitter, Facebook, forums, Reddit, Instagram — is an impoverished model for learning and research and that our survival as a species depends on us getting past the sweet, salty fat of “the web as conversation” and on to something more timeless, integrative, iterative, something less personal and less self-assertive, something more solitary yet more connected.

Document decomposition, or whatever we want to call this process I’ve been doing in federated wiki and Wikity, is one of the new forms of practice for which I’m arguing. By setting fact, figures, ideas, theories, and data free from the argumentative welds they are bound by, we paradoxically make ourselves less immune to their insights. Rather than developing counter arguments about why my set of facts proved the author of that piece was wrong, I spent 15 minutes understanding and connecting his context to mine.

Did it change my mind? No, of course not. It would be a ridiculous and dangerous world where every time you read an article your opinion changed. But the important thing is by understanding and digesting the context he cites — the approach of LBJ to Goldwater, the 64-66 trajectory, the sanitized lexicon and the true strategy of the Daisy ad — I now have a much richer set of connected theories, examples, and  data to think with. And so over time, I will be affected by the article, because my context has been broadened and deepened, and I can think deeper and more complex thoughts.

In fact, you see that a bit already in the way that these facts have modified my take on other things. That story about polarization and marriage, for example, is still an excellent story, and I’ll probably still use it to think about polarization with. But I’ll never call it to mind now without a bit of a twinge, remembering the “Dime-Store New Deal” critique of Goldwater, and the warning that gives us for using 1960 as a baseline for such stuff. Eventually, that may propel me to investigate whether prewar marriage preferences were as benign as those in 1960.

Add here all the caveats — no I’m not saying all blogging is bad, or that Facebook isn’t great for some things, or that there aren’t some writings and ideas that need to be rejected wholesale. I also support the broad use of expressive social technologies in the classroom.

But in a world consumed with the web as an expressive engine of identity, it’s worth it to imagine a countervailing technologies that help us not only express what we know and argue with others about it but ones that actually propel us, slowly over time, to unexpected insights and deeper thoughts.

This is not meant to be a moral panic about technology, Facebook, whatever. But the tech you choose has consequences, and right now it seems to me the mix veers so far towards accretive identity-building that we are losing at least some of our capability to think about thoughts too nascent or controversial to post to our wall.

So let’s try and build the kind of future we actually want, right?