This is a story about cognition and social media. But it begins with a bird.

Our family has a bird, a green-cheek conure named Derp. His brain is about the size of an M & M (original, not peanut). 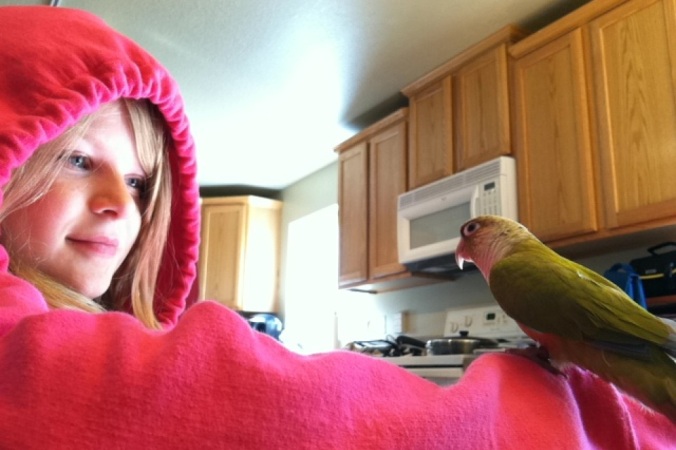 Derp is a quick learner. You can say “Tidy up, Derp” and he’ll gather all the bottle caps and crumbled pieces of paper on the counter, and put them into a cup for you. You can say “Pleased to meet you!” and he’ll shake your hand and say “Pleased to meet you!” When he wants a walnut, he’ll say “Walnut?” and if you don’t listen, he’ll go ring his bell until you look over and he’ll say “Walnut?” again.

He’s an innovator, too. He doesn’t like how hard his pellets are,  for example. One day he mistakenly dropped a pellet into his water bowl, and noticed it was a lot more pleasant to eat that way. Now, to eat, he grabs a pellet, hops over to his water bowl, drops it in and waits a minute, then picks it out and eat it. We have talked to other green cheek owners, and none of them have seen this — it’s not a hard wired behavior. In fact, many green cheek owners have to manually wet the pellets before they put them in the bowl for the parrot.

So let me put this in perspective. Derp has a brain the size of an M & M and has independently discovered cooking.

Now you might think, as I did for many years, that the logical capability of humans is an extension of Derp’s capability, but with a larger brain. But there you’re wrong.

Derp is intensely logical. When new data comes in, Derp adapts. Derp occasionally even exhibits random behaviors, as if to test the null hypothesis. If you could design a Wason test for Derp he’d pass it, easily.

Humans, on the other hand, suck at all these things.  And increasingly, the reason for that seems to be that we don’t really rely on the pellet-wetting parts of our brain to think.

In fact, the most exciting theory of cognition today is Mercier and Sperber’s argumentative theory. What the argumentative theory says is most parts of the brain we use to reason were actually developed not to reason but to convince people to cooperate with us. (Yes, I realize I’m talking in teleological verbs here about evolution, but my lunch break is too short to be careful about language).

This explains why the minute we stake a position we seem incapable of considering counterevidence. Doubt is read as a sign of risk, and plans that look risky don’t get followers.

I’ve been working this story and thread (including a video of Derp) into a keynote I plan to give in a month or so. The place where I’m going is similar I think to where George Siemens and others are — social media, combined with accretive identity and a strong rhetorical bent, is quite literally inhibiting our ability to think. When everything we say is position-staking and identity construction we become dumber than my bird. Who has a brain the size of an M & M. And who is literally named “Derp”.

The answer to this problem is to ditch — or at least downplay — this fusion of advertising, surveillance, and personal branding the web has become, and get back to the vision of a quieter more connective web that people like Bush and Nelson saw. To some extent, make social media less social.

The irony, I’m realizing, is that I have been working on this issue quietly over the past year, not in an argumentative way, but in a foraging mode. And as such I’ve put precious little of that here, in the place people actually look at. But here’s some stuff to look at for the time being.