I’m releasing Wikity 0.3 today. There’s some neat updates to this version. Current users can replace your old theme directory with this one. New users should read the Wikity Guide and follow the install directions there, but use this newer folder (we’ll eventually get the documentation updated).

The biggest change is the “pathways” feature. The pathways feature is intended to eventually be an implementation of Vannevar Bush’s “trails” functionality in the Memex, and we get closer to the inspiration here. When users are in “catalog view” they can construct their own trails (we call them “paths”) using the card checkboxes:

These paths create a special card that will lead you through articles in sequence: 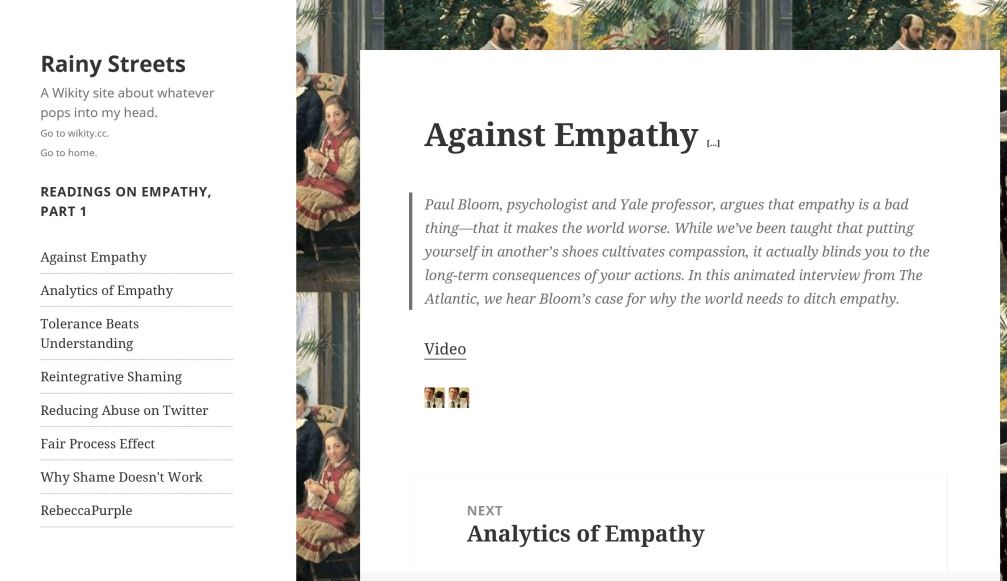 Order can be arranged and edited in both catalog view and card view.

What’s particularly exciting is that we’ve allowed you to more easily create paths out of other people’s content as well. Simply go to someone else’s catalog and select the cards you want, and then point the dialog box to your own site. Not only will the path be copied to your site, but — here’s the really neat thing — all the associated cards will be copied to your site as well. So the pathways feature is actually also a mass-forking mechanism.

We’re going to go further on Pathways pretty soon. For, example, I want simple copying of other people’s paths, just like Bush would have wanted.

We changed the catalog view to be more accessible. Click-to-edit functionality was cool, but not “tabbable” the way that web accessibility guidelines demand. So we have an edit button now that is in the tab order. The click-to-edit functionality is preserved as an alternative with a twist — clicking to edit will open the card at the top of the card, using the button will drop you at the bottom of the card. This meshes well with the two operations that we find most people engage in — writing the abstracts at the top of the cards and the associations at the bottom.

We did a batch of bug fixes. The people that would notice them are the people who asked for them, so I won’t deal with them all here. To my knowledge we’ve fixed all the bugs that people have asked about — if using Wikity you find we’ve missed something let us know.

UPDATE: Here’s a video on how to use Pathways —