In getting ready to present federated wiki at OpenEd and I’ve edited  the “Arthur Clarke” scenario down to seven minutes and fifteen seconds, and crunched it all together.

The set up for this video is this:

Arthur Clarke has some insights in 1950 about global positioning systems. He doesn’t realize that other people are working on this and might benefit from his commentary. But it doesn’t matter, because in this world he uses federated wiki and his ideas auto-magically flow to and are extended by other smart people.

What to notice about this process:

1. It flows seamlessly from an Evernote-ish journal stage, to a Twitter-like/Tumblr-like stage, to a wiki like stage. This encourages contribution while still moving people towards reuse and extension.

2. As pages move through the network, they are transformed by the nodes they pass through, and they also end up connecting previously unconnected authors to one another. This stuff happens in other platforms, but here the dials are turned up to eleven.

3. It manages to move information through a network without the benefit of a central server (ala Twitter, Tumblr, Blogger, wiki). Everyone owns their own server, but the system protocols allow people to easily plug into a fluid, user-defined network. 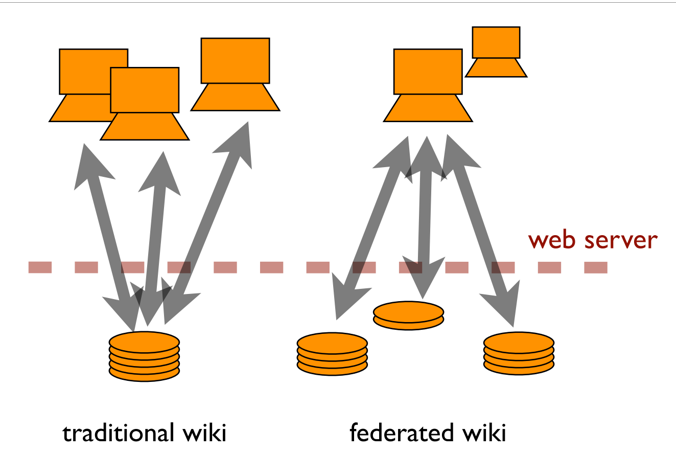 If you already get what’s wrong with the Internet, I think you’ll get why this is a worthwhile initiative. But if you need more rhetoric, this post from last week goes into depth on why these changes matter, and how they could make the Internet a better (and less toxic) place. But it is 5,000+ words and this post is 302.