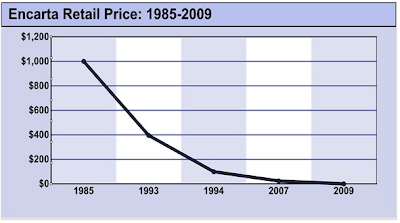 One more note on George’s post. He calls the above the “Encarta price curve of death”, and I think what he is saying is that as content became cheaper to produce consumers were less willing to pay high prices for it.

I haven’t read the article he linked to thoroughly, but my guess is this is a partial misread of the graph. This does not represent a stable set of consumers willing to pay less and less for a product, but rather it represents an evolving market. The price drops not because the content becomes less valuable, but because the market for that content at lower price points becomes larger.

In 1985, the set of customers interviewed, I imagine, would be library purchasers, and maybe some forward thinking home users (how many people even had a home PC in 1985?). By 1994, that market was everyone. That’s actually most of the collapse, right there, pre-web. The price collapsed not because information became more worthless, but because suddenly a lot of people had PC’s with CD drives. The price collapsed because demand expanded, and competitors began to compete using different math to make ends meet.

In other words, the curve of Encarta is a classic sort of disruptive innovation effect, where a previously niche product becomes commodified, and finer gradations of quality become far less meaningful than price.

I don’t think this undermines George’s argument per se, but it is an important distinction. To the extent our institutions are like Encarta, it is because there is more demand for education, not less, and the institutions that survive will be those that realize that higher education is ceasing to be a niche product and follow the economics of that shift to its logical conclusion.