I live in the Portland metro area; if the traffic isn’t bad I can make it from my doorstep to Powell’s in about 20 minutes. If the traffic is bad, my family sometimes parks the car at the park & ride at Parkrose, and takes the MAX in.

People don’t realize how small Portland is, and, consequently, how much the recent killings here hit people. Everything is connected here. As an example, my wife works at an art market selling her art on weekends, and a weekly paper (The Portland Mercury) just reported that the assailant in the killings, Jeremy Christian, may have been one of the people who sets up just outside the market (at Skidmore fountain) selling wares illegally off of blankets.

I’m not 100% sure that is true, but some of the artists at the market have been complaining that the police have not taken the risk involved with these unauthorized street vendors seriously.  If it is true, it changes how we think about that quirky market, and the laissez-faire attitude of the police in this town toward street activity. And it makes me worry about her, breaking down her art tent as that market empties out at night, surrounded by the homeless the city turns a blind eye to, never knowing if the person yelling obscenities and slurs at her or someone else is simply mentally ill, or mentally ill and dangerous. Or maybe just dangerous.

There are other connections, but suffice it to say Portland is really just an overgrown town at times. And a lot of what people idolize — Keep Portland Weird, after all — has a corresponding dark side, an unwillingness to confront what happens when you mix a deep historical racism with a Western left-libertarianism that sees “live and let live” as a sufficient solution to complex social problems.

On a national level, people want the killings to tell a simple story for their side, but I’m not entirely sure they do. According to Buzzfeed, the killer was not a Trump supporter, but a passionate Bernie Sanders supporter. Even as a white supremacist, he couldn’t bring himself to vote for Trump, and, like a number of Sanders supporters, sat the election out. How do we process this — the Bernie Sanders-supporting liberal-hating white supremacist?

Of the two people who gave their lives to stand up against hate and bigotry, one of them was an ex-military man, a Republican who ran for the office of county commissioner. I don’t know the political leanings of the two other heroes, the one that died and the other one who very nearly did, but of course we’re not looking to compute partisan percentages here. When the time came, people from various walks of life stood up and did the right thing, paying the ultimate price.

What do we say about this killing in supposedly-but-not-actually tolerant Portland of a virtuous Republican by a Nazi-supporting Democrat? Is it, as Noah Smith says, an indictment of the “shouting class“? Of the idea that every battle must be apocalyptic? Is it a reminder that the world does not sort into the categories we want it to? Is it ridiculous to tie this event to the performative anger we practice in the digital world, or is there something there?

So maybe the best thing for the moment might to be to shut up, and contemplate them, the three who intervened: 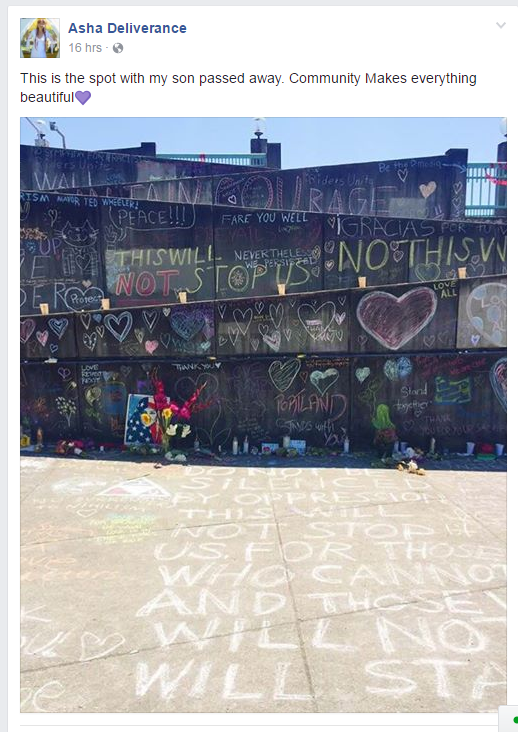