So yesterday I spent the day — and really, almost the entire day — fact-checking so-called “statements of fact” here, on this rather boring Rick Perry article. 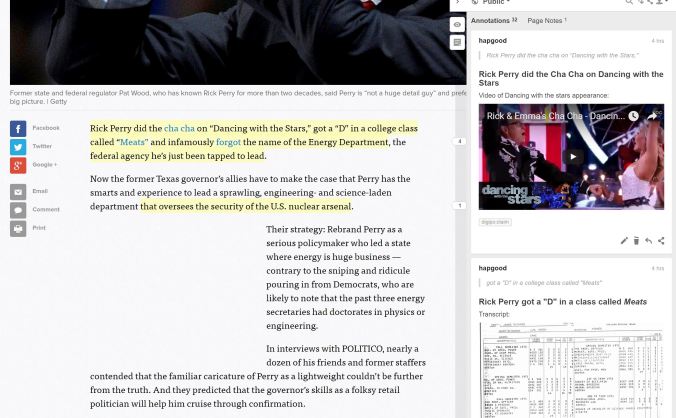 So, for example, the article says that Rick Perry did the Cha-Cha on Dancing with the Stars. We check that Perry actually got a “D” in a class called “Meats”.  We verify that the Energy Department oversees the nuclear arsenal.

We know all this already, or most of it. I didn’t know he did the cha-cha, but I knew he was on Dancing with the Stars. I didn’t know about the “D” in meats, admittedly, but I did know that the Energy Department oversees the nuclear arsenal, which is probably a more useful fact to hold on to.

Let’s keep going for a bit. 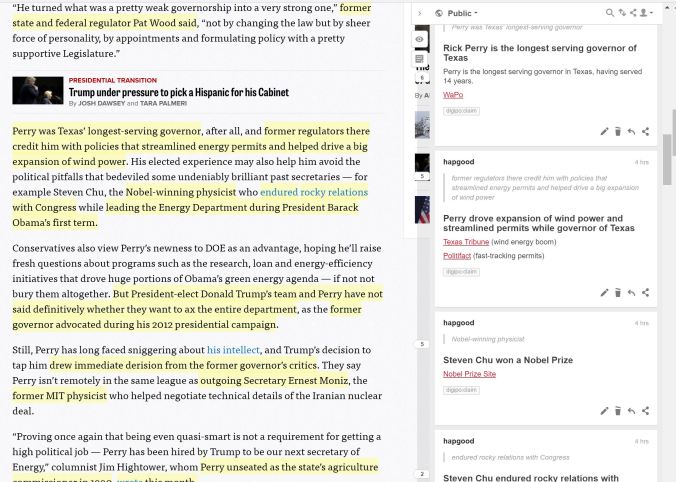 Rick Perry is the longest serving governor of Texas, check. Perry oversaw a massive expansion in wind power in Texas, as well as streamlining permits for polluters, check. Steven Chu, the current Secretary, won a Nobel prize, and was an MIT physicist, check. Chu was the Secretary for Obama’s first term as well, check.

That’s barely the start. For each claim, I tracked down either a definitive source or a couple half-decent sources. And each claim was true.

What should you fact-check? (and don’t say “everything”)

The Hypothes.is annotation tool turns out to be an amazing tool to do this sort of work, and I’d recommend it to student fact-checkers, as it allowed me to link directly to the quotes in context that supported the claims. Click around in this page and see what it makes possible. I’m impressed.

But the work here? Boring. Incredibly boring. Mind-numbingly dull, at least to me. Proving things I not only already now to be true, but things I think are already common knowledge among a politically literate set turns out to be less than rewarding.

Scanning this article, I know what claims — out of probably a hundred of so claims made — are bound to be most interesting:

Why those four claims? Because those are the ones that seem to me

That second piece is really important. While some interpretation is needed for the above claims, there’s an empirical component to them that makes directed investigation possible. Wind power increased or it didn’t, and actions that Perry took can either be plausibly tied to that or not.  I can’t know whether Perry was a pragmatic governor, but I can probably survey enough contemporary articles to see if a significant bipartisan population thought that during his tenure.

At the same time, the claims are “squishy” — they are not really a binary true/false sort of thing, although with enough evidence one way or another we could probably make such a ruling. What we really decide, usually, is whether these claims are well-supported by the evidence out there. And since this news source (in this case Politico) has presented these claims as statements of fact, we learn a bit about what Politico considers the statements-of-fact cutoff. We learn what Politico considers to be “well-supported”, and that in turn might tell us if we really want to continue reading Politico.

In other words, these aren’t just the most interesting claims, they are likely to be the most revealing about the source as well. Questions on either side of these, whether purely factual (Chu won a Nobel Prize) or very abstract (“Perry may be smarter than people think”)  can tell us interesting things about the credibility and bias of the publication, but my sense is it’s these squishy questions that give us the biggest bang for the buck.

I’m wondering if students can spot the most promising four or five claims in an article, or if it takes more background knowledge to do than we think.  Any thoughts?