Almost a month ago, I wrote a post that would become one of my most popular on this site, a post on the They Had Their Minds Made Up Anyway Excuse. The post used some basic things we know from the design of learning environments to debunk the claim that fake headlines don’t change people’s minds because “we believe what we want to believe.” The “it didn’t matter” theory asserts that only people who really hated Clinton already would believe stories that intimated that Clinton had killed an FBI agent, so there was likely no net motion in beliefs of people exposed to fake news.

This graf from BGR most succinctly summarizes the position of the doubter of the effects of fake news:

On a related note, it stands to reason that most individuals prone to believing a hyperbolic news story that skews to an extreme partisan position likely already have their minds made up. Arguably, Facebook in this instance isn’t so much influencing the voting patterns of Americans as it is bringing a prime manifestation of confirmation bias to the surface.

In the weeks after the election I saw and heard this stated again and again, both in the stories I read and in the questions that reporters asked me. And it’s simply wrong. As I said back in November, familiarity equals truth: when we recognize something as true, we are most often judging if this is something we’ve heard more often than not from people we trust. That’s it. That’s the whole game. See enough headlines talking about Eastasian aggression from sources you trust and when someone asks you why we are going to war in Eastasia you will say “Well, I know that Eastasia has been aggressive, so maybe that’s it.” And if the other person has seen the same headlines they will nod, because yes, that sounds about right.

How do you both know it sounds right? Do you have some special area of your brain dedicated to storing truths? A specialized truth cabinet? Of course not. For 99% of the information you process in a day truth is whatever sounds most familiar. You know it’s true because you’ve seen it around a lot.

More on that in a minute, but first this update.

New survey evidence out today from Buzzfeed confirms this.

Here’s what they did. They surveyed 3,015 adults about five of the top fake headlines of the last weeks of the election against six real headlines. Some sample fake headlines: “FBI Agent in Hillary Email Found Dead in Apparent Murder-Suicide” and “Pope Francis Shocks World, Endorses Donald Trump for President, Releases Statement.” Some sample real ones: “I Ran the CIA. Now I’m Endorsing Clinton” and “Trump: ‘I Will Protect Our LGBTQ Citizens'”.

They then asked respondents whether they had seen that headline, and if they had, whether that headline was accurate. Perhaps unsurprisingly, Trump voters who had seen pro-Trump headlines believed them at high rates that approached or exceeded belief in true news stories. Ninety-six percent of Trump voters, for example, who had seen a headline that Trump sent his own plane to rescue 200 marines believed it. Eighty-nine percent of Trump voters having seen headlines about Trump protesters having been paid thousands of dollars to protest believed it.

This in itself should give second thoughts to the thesis that fake news only affects extreme partisans: it’s absurd to claim that the 98% of Republicans who remembered that headline and believed it represent a particularly partisan fringe.

Now, caveats apply here: surveys about political matters can get weird, with people occasionally expressing themselves in ways that they feel express their position rather than their literal belief (we had debates over this issue with the “Is Obama a Muslim?” question, for instance). Additionally, we are more prone to remember what we believe to be true than what we believe to be false — so a number like “98% of Republicans who remember the headline believed it” does not mean that 98% of Republicans who *saw* that headline believed it, since some number of people who saw it may have immediately discounted it and forgotten all about it. 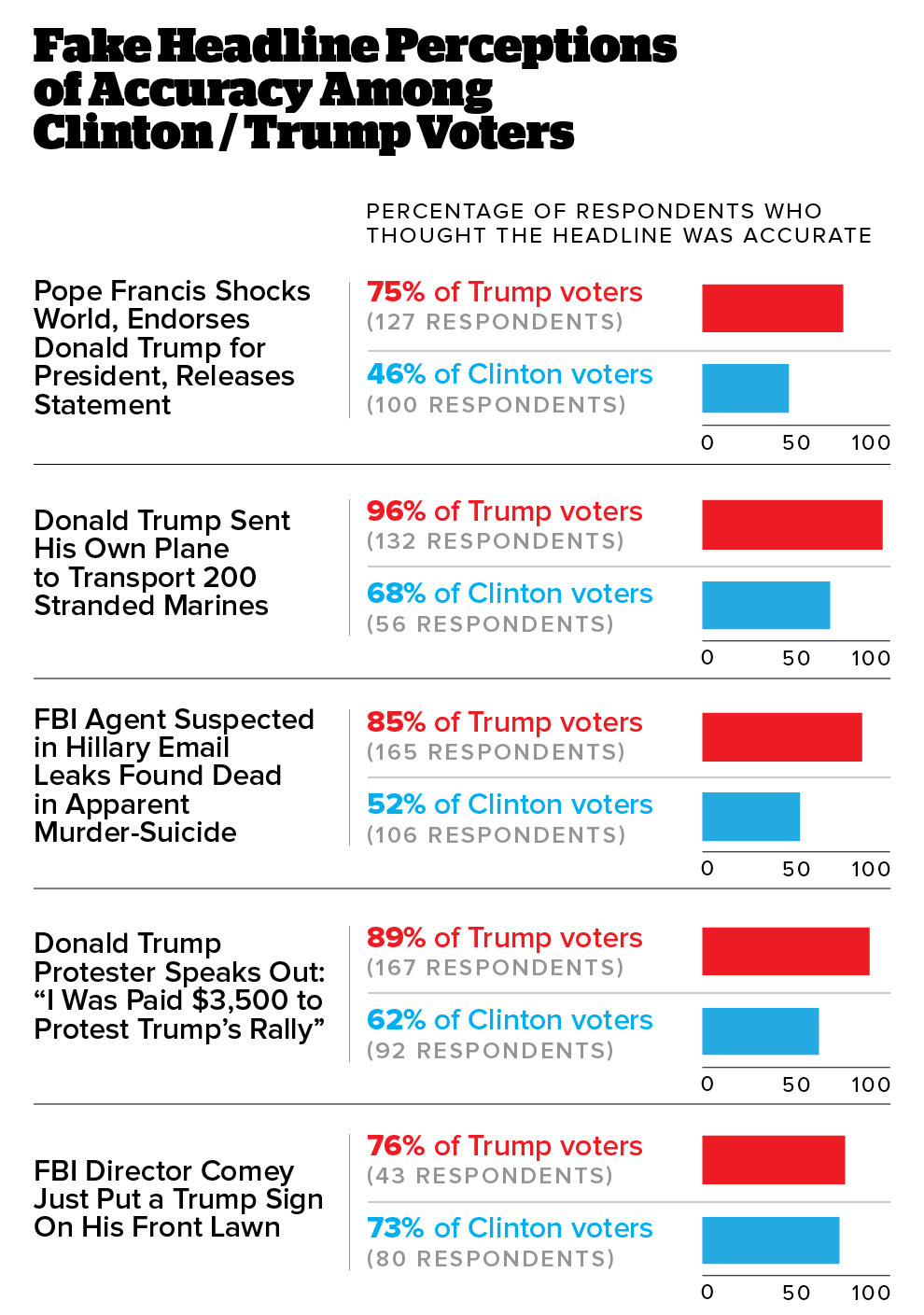 Here’s the stunning part of the survey. As mentioned above, Trump voters rated pro-Trump and anti-Clinton stories true on average, and overwhelmingly so. The lowest percentage of Trump voters believing a fake headline was accurate was 76%, and the highest was 96% with an average of 86% across the five headlines. But even though the headlines were profoundly anti-Clinton, 58% of the Clinton voters who remembered seeing a headline believed the headline was accurate.

I want to keep calling people’s attention to the process here, because I don’t what to overstate my claim. If I read the study correctly, 1,067 Clinton voters completed it. Of those voters, 106, or 10%, remembered seeing a headline stating that an FBI Agent implicated in leaks of Clinton’s emails had died in a suspicious murder-suicide. The fact that this tracks people who remembered the headline and not people who saw it is important to keep in mind.

Yet among those 10% of Clinton supporters who remember seeing the headline “FBI Agent Suspected in Hillary Leaks Found Dead in Apparent Murder-Suicide” over half believed it was accurate.

These 10% of Clinton voters who ended up seeing this may differ in some ways from the larger population of Clinton voters. They may have slightly more conservative friends. They may be younger and more prone to get their news from Facebook. In a perfect world you would account for these things. But it is difficult to believe that any adjustments are going to overcome a figure like this. Over fifty percent of Clinton voters remembering fake headlines that were profoundly anti Clinton believed them, and no amount of controlling for differences is going to get that down to a non-shocking level.

Why would Clinton voters believe such a headline at such high rates? Again, familiarity equals truth. We chose the people we listen to and read, and then when thinking about a question like “Did Obama create more jobs than George W. Bush?” we don’t think “Oh, yes, the Wall Street Journal had an article on that on page A4.” We simply ask “Does that sound familiar?”

So how does this work? I’ll diverge a bit here away from what is known and try to make an informed guess.

Facebook, with its quick stream of headlines, is divorced from any information about their provenance which would allow you to ignore them. My guess is each one of those headlines, if not immediately discarded as a known falsehood, goes into our sloppy Bayesian generator of familiarity, part of an algorithm that is even less transparent to us than Facebook’s.

Confirmation bias often comes a few seconds later as we file the information, or as we weight its importance. Based on our priors we’re likely to see something as true, but maybe less relevant given what know. I’d venture to guess that the Clinton voters who believed the murder-suicide look very much like certain Clinton voters I know  — people who will “hold their nose and vote for her” even though there is something “very, very fishy about her and Bill.” The death of the FBI agent is perhaps in the unproven, but disturbing range.

You see this in practice, too. I’ve had one Clinton voter tell me “I’m not saying she killed anyone herself, or even ordered it. But sometimes if you’re powerful and you say someone is causing you problems, then other people might do it for you. Like in Becket.”

That is a close to verbatim quote from a real Clinton voter I talked to this election. And for me statements like that are signs that people really do wrestle with fake news, because no matter what your opinion of Clinton is, she most definitely has not had people killed. (And no, not even in that “Who will rid me of this troublesome priest?” Becket way.)

Given our toxic information environment and the human capacity for motivated reasoning, I’m certain that many folks were able to complete the required gymnastics around the set of “facts” Facebook provided them. I’m just as sure a bunch of people thought about that Olympic-level gymnastics routine and just decided to skip it and stay home. How many? I don’t know, but in an election won by less than 100,000 votes, almost everything matters.

In any case, I said this all better weeks ago. I encourage you to read my more comprehensive treatment on this if you get the chance. In the meantime, I’d remind everyone if you want to be well-informed it’s not enough to read the truth — you also must avoid reading lies.

One thought on “Familiarity = Truth, a Reprise”