Here’s my problem with Hypothesis, the annotation tool. I think it’s also an opportunity.

A friend shares a list of “100 biggest Clinton Wikileaks Revelations” on Facebook. As expected, it’s just a mess of fuzzy thinking and misinformation, tied weakly to links to emails.

I think — hey, here’s a good opportunity for Hypothesis. Maybe I can put a damper on some of this stuff. Or at least find some solace in the quiet mental work of annotation so that I don’t drink myself to death before November 8th. 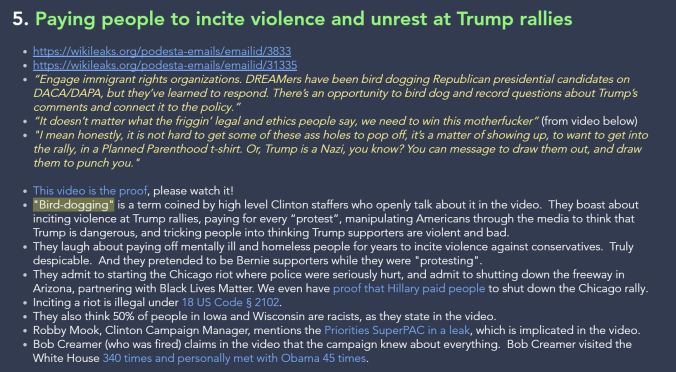 Ok, so I know ALL this is false, but what catches my eye here is the claim “Bird-dogging is a term coined by high-level Clinton staffers who openly talk about it in the video.They boast about inciting violence at Trump rallies, paying for every protest…”

Wait, what? Bird-dogging is about violence?

I was a bird-dogger for some events in 2008 and as a blogger got to know a bunch of bird-doggers. Clinton didn’t invent the term and it has nothing to do with violence. Bird-dogging is well-known in blogging and activist circles. What the term means has shifted over time, but in the modern age a bird-dogger goes to an event and tries to get the candidate on the record about issues they care about. You go to an event with a camera (or better, with a friend with a camera) and try to get called on. If your issue is Common Core, you ask a question about Common Core. If your issue is loose nukes, you ask a question about loose nukes. You get it on camera, and share it.

Here’s an example of how it works from 2007. I went as a Blue Hampshire blogger to a Huckabee house party, and found a bunch of activists from the AIDS relief group ONE were at the event was well. They were bird-dogging all the candidates on the issue of whether they would support AIDS funding. I caught Huckabee’s answer to that on video, and pushed it up to Huffington post and created a minor stir. (It actually made HuffPo’s top news story for a bit, and was their firsr OffTheBus story to do that — the first time independent blogger-produced news made the front page of the site).

So when the person in the video is talking about bird-dogging, that’s the context. It has nothing to do with Clinton, or violence, or even protest. Like a dog on a hunt, the job of the bird-dogger is to flush the hidden into the open. If you watch the video thinking otherwise, you’re going to be very misinformed.

OK, so annotation — I go to annotate bird-dogging and link it to resources. But what I find is that there is no good summary of bird-dogging in politics. There are guides on how to bird-dog, mentions of bird-dogging, and definitions that are too vague to be useful. If I jump people into this mess of links, they are just going to get lost trying to piece everything together which is what makes conspiracy so resilient on the internet in the first place.

So I’m going to have to write significant text here. For this one word. And that’s good, because I’ve discovered a hole in the web that needs filling. But it’s bad because why the heck am I going to write a comment that is only visible from this one page? There are hundreds (maybe thousands) of pages on the internet making use of the fact that there is no clear explanation of this on the web.

My point (I guess) is we have a solution for this. It’s called hypertext. It allows small pieces of information and explanation to be reused in multiple ways through a system of links, so that we can maximize the utility of the research we produce and practice the principle of keystroke preservation, by passing by reference (and letting others use that reference). And if we do that, we’ll start to produce annotations that are more significant than comments in scope and scale and usefulness, ones that start to plug some of the holes in our information environment. If we don’t, all work of note will be stranded as responses to individual documents.

Here’s my note on bird-dogging in Hypothesis. You’ll notice that there are Annotations (tied to words) and Page Notes (tied to documents) at the top. Why not add one more category — Personal Wiki — tied to nothing specific, that I can reuse wherever I see fit? Otherwise it’s going to take a lot of typing to fight this Wikileaks nonsense…

6 thoughts on “Here’s My Problem With Hypothes.is”