Readers here will have been following my discussion of the use of the Stream as a guiding metaphor for the web. The Stream has its roots in conversation. It organizes communication as a string of sequential events. This is opposed to the Garden, which has its roots in literary culture, and organizes knowledge spatially, as a sort of knowledge map.

Some technologies have a very clear bias. Email, with its inbox and explicit replies, is very stream-driven. HyperCard, with its multiple paths and web of references was very garden. The web is an unusual beast, having been conceived as a garden technology (a hypertext network of documents) onto which a stream model has been grafted and is now the dominant paradigm (Twitter, Facebook, Instagram, everything).

I’ve mentioned that the earliest streams appeared on the web very soon after the web’s inception. The first example, in fact, is probably the NSCA’s What’s New page. 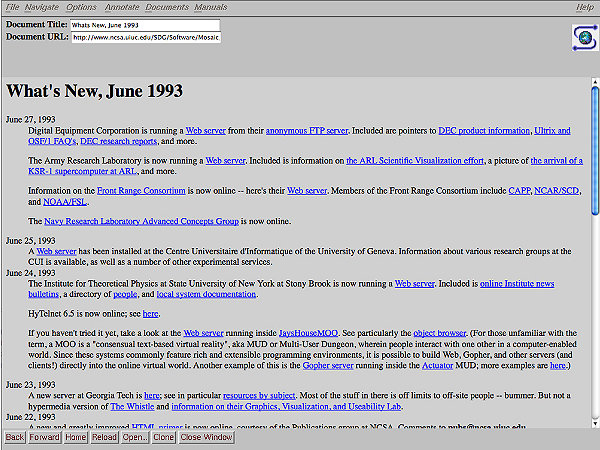 The page shows a simple but powerful idea. It’s a simple web page, but when new content was found on the web (generally by virtue of a new server coming online) the new info was added to the top of the page. This model is doubly powerful because so many people set the What’s New page as their home page. Later, link bloggers and others would follow this pattern. In the mid-aughts Twitter, Facebook, and others would adopt this as their dominant paradigm for presentation of information, and that’s how we get here.

What occurred to me this morning was that this technique was originally designed not for information overload, but information underload. The problem that NCSA was dealing with, in part (besides lack of a search engine at that time), was that if you went out on the web each day it would seem relatively unchanged and static. There really wasn’t much to do. Channeling this activity in this “What’s New” way helped because if this information was in a directory structure instead you might never see the new stuff at all.

If you look at a number of other prominent streams, from early link blogging to the first Facebook feeds, you see this pattern repeat itself. Streams are born not because people are overloaded with good choices of things to read but because people perceive a paucity of information. Without the stream there is nothing to read.

Over time, that information grows, and the stream becomes less about discovery and more about curation, whether that curation is human or algorithmic.

I don’t really know what to do with this insight, but just thought I’d note it.

3 thoughts on “The Web Stream Was Designed for Information Underload”