Recently, a slogan I created went viral. Since my area of (day job) expertise is how we use networks to learn and collaborate, I thought I might talk about how that happened, and what its path to fame can tell us about information flow in networks.

Today, I want to just set the story up. Tomorrow I will discuss how what happened undermines most people’s “common sense” understanding of networks, but is supported by current and older research on networked behavior.

When I woke up to the news of the Orlando shooting a little over a week ago, I was horrified like most people at what had happened. But I also have been in online activism long enough to know that the “meaning” of an event often gets hashed out in places like Twitter in the hours after it. I thought I could make a difference there.

I decided I would make an avatar to express that the main story here was not about ISIS. It seemed to me that there was one set of interpretations floating out there that would end up at “ban muslims” and another set that wouldn’t. And I desperately didn’t want Islamic terrorism to become the primary frame through which we viewed Orlando.

I started out by taking an transparent screen of a rainbow flag and putting over my current avatar of my face, expressing solidarity with our LGBTQ folks (including my oldest daughter). Except that didn’t work, because it neglected the gun violence message, casting this as solely an event of hatred, and hiding the fact that this was also yet another in a chain of high-magazine assault weapon tragedies.

I thought back to Charleston, the Dylan Roof shooting a year ago. Back then, people casting it as a result of white supremacy (which it was) claimed that the gun control folks were minimizing their message by portraying it as “just” another gun tragedy. People in the gun control movement were upset that they were supposed to stay silent on this issue so that the racism issue could be highlighted, even though the gun control movement relies on making the most of small windows of public outrage after an event like this.

Every image and phrase I came up with had tripwires. I could put “Not One More” or “Stop the Violence” on top of a rainbow flag, but that seemed to equate one of the worst hate crimes in modern American history with school shootings and San Bernadino. I made one that said “Stop the Hate”, but now I was ignoring the gun control issue. It started to feel like I was just going to have to pick a side. It was Charleston all over again.

Then about 90 minutes into brainstorming avatars, it hit me. I had just made a “Stop the Hate” one when I thought of a small tweak that pulled it all together. I showed it to my wife, Nicole.

Nicole thought a second. “No, I like it. It says a bunch of things in two short words. It’s clever, but it’s not cute.”

I uploaded it to my Twitter profile, which borked the readability of it a bit. I spent another hour fiddling with font-sizes, drop-shadows, and letter positioning, uploaded the finished version and tweeted out that other people should steal it and make it their avatar.

As you can see from the avatars at the bottom, some people came by relatively immediately and grabbed it for their avatar. (Special thanks to Amy Collier in particular, who picked it up and changed it to her avatar two minutes after I tweeted this).

People started grabbing the avatar from other people, and tweeting the hashtag #DisarmHate. It felt small, but it still felt good.

My daughter was at the Portland gay pride parade yesterday and pictures that had her tagged in them started coming back to Nicole’s Facebook account (I’m not on Facebook). Suddenly she pauses.

“Hey, Mike,” she says, “What was your avatar slogan again?”

“I think someone has it on the back of their shirt.”

She showed me the photograph:

One of the pictures Katie’s ex-girlfriend took in Portland.

Wait, what? It’s not exactly my avatar, but boy is that familiar…

I looked at the news: 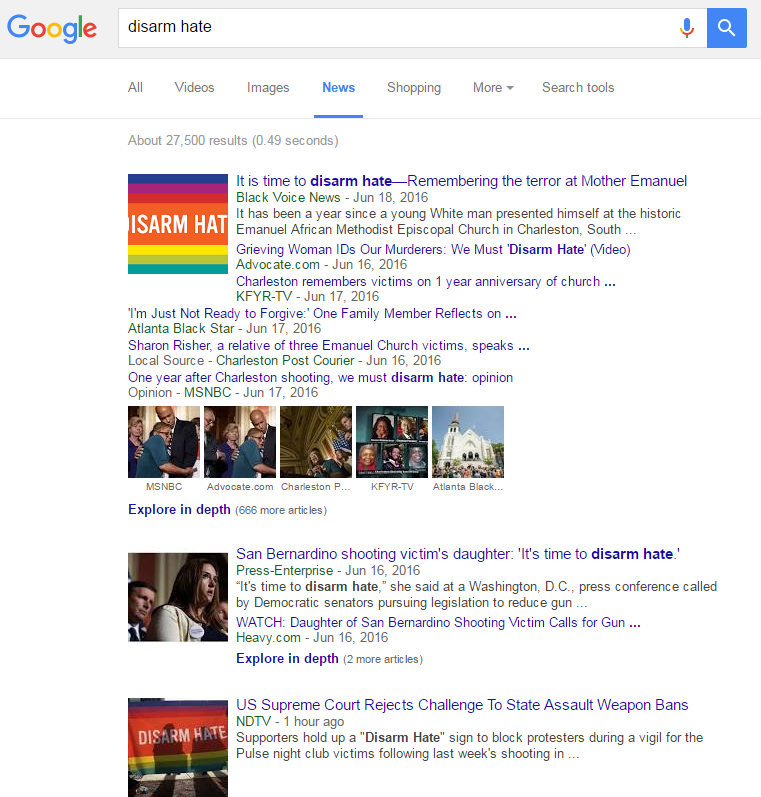 By the way, here’s the news up to day I coined it — the phrase (as phrase and not random collisions of words) simply doesn’t exist in the media:

So what the heck happened? How did my tagline go viral? How’d a slogan invented on Sunday become the term of choice for a movement by Wednesday?

It’s probably not what you think.

Tomorrow I’ll talk about how the “organic” model that most people assume creates virality is a load of bunk. (Short summary: the phrase got a huge boost people whose job it is to find these sorts of things and promote them through the network; organic is just another name for “well-oiled and well-funded advocacy machine”).

4 thoughts on “How My “Disarm Hate” Slogan Went Viral”