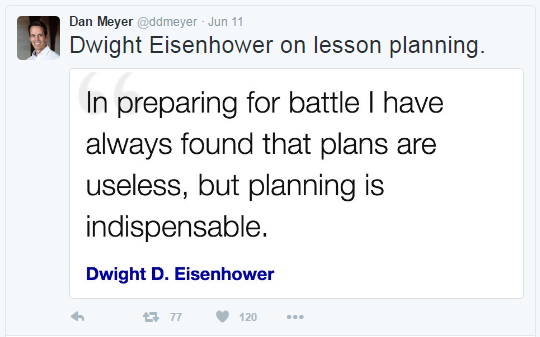 Dan Meyer quotes Eisenhower: “In preparing for battle I have always found that plans are useless, but planning is indispensable.”

It’s likely that Eisenhower said the above lines, but it’s actually Richard Nixon who reported them. Nixon, in “Crisis 4” of his “Six Crises” writes about his Kitchen Debate with Soviet leader Nikita Khrushchev, and it’s from there alone that Ike’s saying enters the written record.

Nixon’s prose in that article is a bit self-congratulatory, but the point of quoting Ike is clear. Nixon did a lot of preparation before going to Russia in 1959, learning about their aims, the psychology of Khrushchev himself, and the larger cultural context. He used that to put together a plan of how we would approach the leader, debate him, and the points he would try to make.

Within 30 seconds of meeting Khrushchev, the plan was out the window. Khrushchev made a practice of getting opponents off-balance by being unpredictable, and when Nixon stopped by his office for a simple meet-and-greet before the debate Khrushchev viciously dug into him about Captive Nations Week, a week recently signed into law that called for prayer for countries held captive behind the Iron Curtain. How could he defend such a thing?

Nixon makes the point that, while the plan itself was knocked off-balance by this unexpected offensive, the process of planning allowed him to fluidly adjust his approach. He had learned much about Khrushchev’s character, why the Soviets were meeting them, and what they were attempting to achieve. Knowing, for example, that Khrushchev’s working assumption was not that the U.S. wanted war, but that the U.S. was soft and would fold under aggression allowed him to calibrate his responses correctly. Understanding the materialist underpinnings of  Soviet philosophy allowed him to see the ideological frame to which he had to bend his arguments.

It was obvious that no plans could have possibly been devised to cope with such unpredictable conduct. Yet without months of planning … I might have been completely dismayed and routed by his unexpected assaults.

By making a plan, you get an understanding. And it’s the understanding, not the plan, that is the prime asset, as it allows you to respond fluidly to rapidly evolving situations.

While Nixon’s parallel to battle planning is a bit overblown, it’s instructive. Imagine if Eisenhower was given a plan by his best strategist and then Eisenhower implemented it, without having been involved with its development, and without having developed all the background understanding and knowledge that one gets in making a plan. How well would that go?

Lesson Plans and Other OER

And here’s where we get to lesson plans and to issues around OER in general. The question Dan and others have been grappling with is why lesson plan reuse is low. Why, in a world full of digital resources, do teachers still construct their own material from scratch?

But for at least a certain class of materials — lesson plans for secondary teachers — Dan seems to be coming to the conclusion that we have a bit of an Ike problem. If we get the plans without carefully thinking about what we want to achieve, what our students already know, and what problems we’re likely to encounter, we’ve lost the most important part of the process.

This is not to say that there is no place for sharing of lesson plans. Or for the sharing of other OER. But it is to say we have to approach the construction and sharing of OER understanding that there may be certain processes in course construction that we just can’t short-circuit. To the extent we develop materials and sharing architectures for faculty they need to make that planning process more effective, not simply bypass it.

6 thoughts on “Plans vs. Planning”