Ari Bader-Natal suggests an excellent idea for bootstrapping a Wikity library. What if you could import the bookmarks you’ve been saving for years in Pinboard, Pocket, or Google Bookmarks? 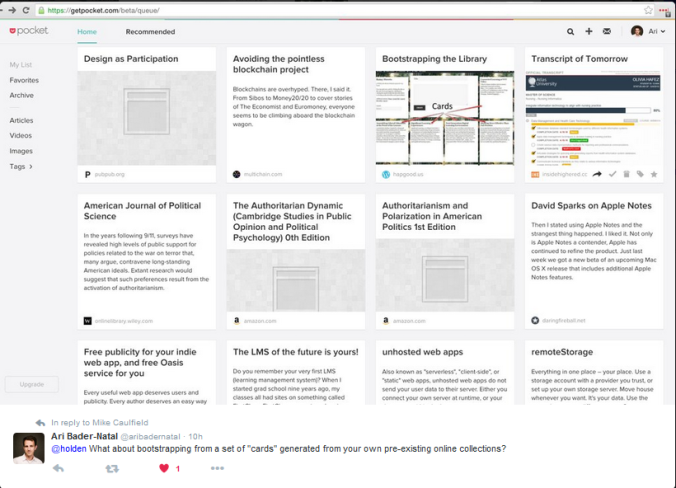 @aribadernatal: What about bootstrapping from a set of “cards” generated from your own pre-existing online collections?

This is actually pretty genius.

Initially I worried that it would get people to engage in bookmarking behavior in Wikity, which is what we are trying to avoid. Wikity, unlike bookmarking, is meant to gain its power from the novel and repeated recombination and maintenance of cards rather than acting as a memory aid. It can look like bookmarking, but it’s much different.

But then Ari pointed out that the bookmarks could be imported with a tag that reflected that they had not been done up yet as true Wikity cards. Users could search for information, find the cards, and iteratively improve them as they go.

This is a brilliant way of bridging old technology and new. But it brings up a question: What does it mean to convert a bookmark to Wikity style? So let’s show you that.

So I have this bookmark from last year in Pinboard on Yoko Ono. It’s to this article, which is primarily about why seeing Ono as the “person who broke up the Beatles” does a real disservice to her creative vision in the areas where she had excelled. Along the way it explores the misogyny of the Yoko legend, and celebrates some of her artistic achievements, many of which see prescient now. 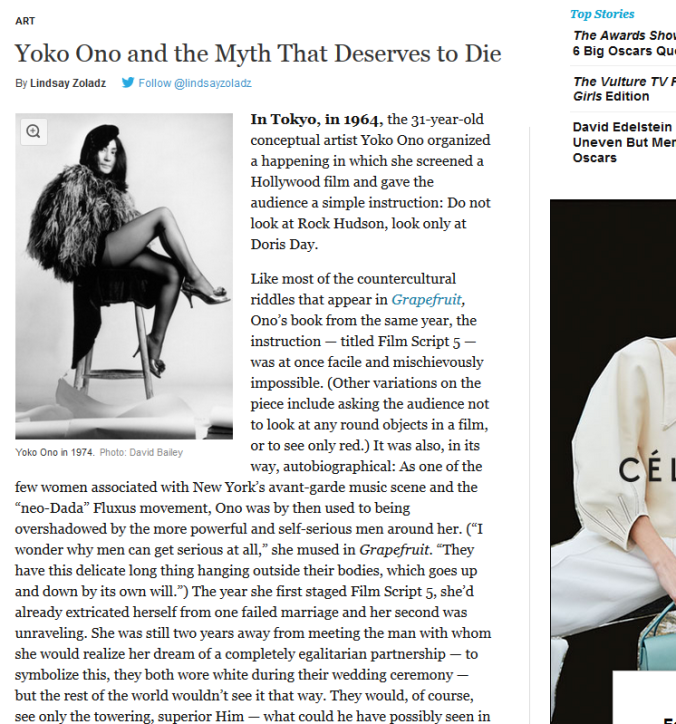 It’s a complex argument and subtle presentation, and it’s written in a form — essay — which supports that.

But it’s also a form that resists recombination and reuse. All these facts and ideas and theories and examples in the article are welded together to make a point, and at the end they succeed: Yoko suffered an erasure, based on racist misogyny, despite the brilliance of her work.

Now, you can bookmark that, and if anyone ever says to you — “Yoko broke up the Beatles” or mentions that she was unfairly vilified, or that she was actually a creative genius — just not a genius in the form her husband made his living in — you can say, actually I have an article about that for you to read!

Bookmarking is awesome. Don’t get me wrong. But when we are bookmarking big elements like this we are not tapping into the power of hypertext.

So how do we remake it into hypertext? We look for the smaller, re-combinable pieces in the text and write them up. Let’s start with the first thing of interest in the article: this “Film Script 5” that she wrote.

The name of the card is not the document name in most cases, it’s a name for the example, idea, or bit of data in the card.

It’s also not necessarily a description of the card. It’s a name, like a variable name in coding. It might be descriptive, but it should also be short and memorable and above all unique. What I’ve found in practice is to make it unique and memorable you have to bend on the desciptiveness, and sometimes get a bit cute.

In this case we’re taken by the instruction that is given the audience in Ono’s happening. She tells those attending the screening: “Do Not Look at Rock Hudson. Look Only at Doris Day.”

Let’s name the card “Look at Doris Day”, a slight but justifiable abbreviation. This is the name for our idea/example.

I often write a bit of the treatment (the body of the card) before I write the abstract (the introductory paragraph). This allows me to play with the idea a bit before locking down its significance.

Here, reading the article has made me want to see the full text of “Film Script 5”, the script to the screening of a Doris Day film in Tokyo where the audience was given impossible viewing instructions. So I go out and get it (I find a copy in a comment on Amazon). I drop it into the card:

Ask the audience the following:

1) not to look at Rock Hudson but only Doris Day.

3) not to look at blue but only red — if blue comes
out close eyes or do something so you do not see,
if you saw it, then make believe that you have not seen
it, or punish yourself.

This is neat. It is a big ball of things, transgressive in many ways. It has a sense of humor too, making a bit of a play in points 2 & 3 on fundamentalism, propaganda, and the excesses of religion. I write up that stuff:

This is a bit of Dada, a bit of Fluxus. It’s a play too on fundamentalist religion and other forms of belief (you can’t actually make round objects square and angled, for example). And of course the title “Film Script” is hilariously funny: this is a script not of a film, but a script to follow while watching a film.

Then it occurs to me that this activity might be modified for the classroom, so I add that:

This might also be an activity that could be useful in a film studies class. Can students watch a film and write a “film script” for it that helps a watcher see a deeper meaning? Or the impossibility of watching it in a certain way? Not entirely her intent, of course, but a possible application.

Now we write the summary. This is important, because it’s the piece that will be visible in search results. What’s the main thing that interests us about this piece of art?

For me, it’s the way that the viewer is brought into the artistic process. That seems generative to me. There’s also something here about found art — placing cultural artifacts into contexts designed to make them seem strange:

The “film scripts” of Yoko Ono’s 1964 work “Grapefruit” are in fact meta-scripts, ways to watch films not intended by their makers. They allow the viewer of a film to transgress the expectations of viewership, and a way to “defamiliarize” existing art. In doing so, they invite the viewer into the artistic process.

What does this link to? I search in my card library. The defamiliarization aspect is interesting to me. I remember a card I wrote about the “Commodity Sculpture” of the 1980s, which aimed to defamiliarize cultural objects like basketballs by placing them in odd contexts: 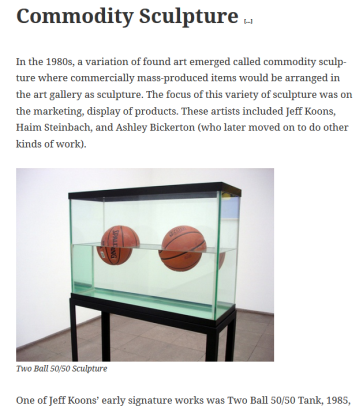 I throw in a string of dashes (to indicate that we are in the references section) and throw in a link. For readability, we try to put the link at the end of the linking sentence. 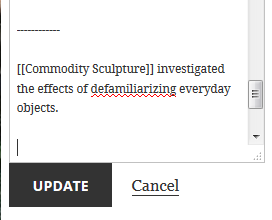 There’s also something here about audience participation I’d love to capture in a link. on that. I search “audience” and see the “Horse_ebooks” card. 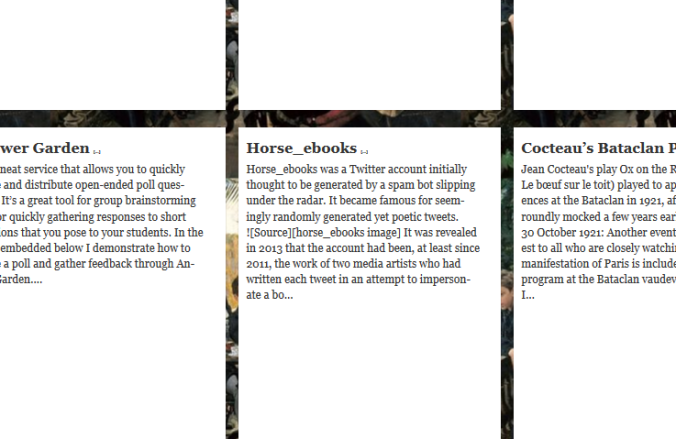 Now Horse_ebooks was a Twitter account that originally seemed like a parallel to Ono’s scripts here: a spam account that produced random strings of text that we as readers choose not to read as spam, but as poetry: 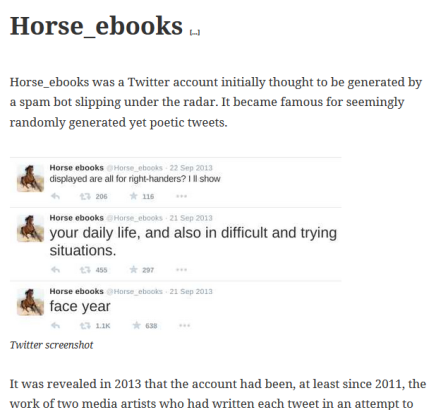 But there’s a twist here, because it was revealed in 2013 that the account was in fact an art project: not a spambot at all, but poetry created by authors made to look as if it had been produced by a spambot. So let’s write that up: 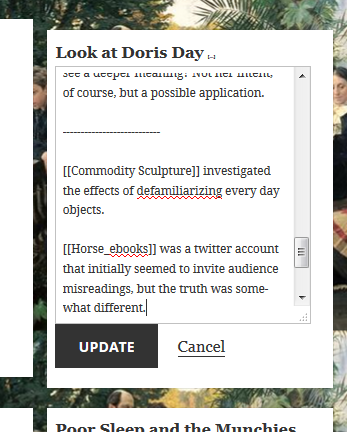 There are better connections, to be sure, and maybe if you copied the card you could add them. But this is a good start. The thing is that even though we may not come up with great connections in the moment, as we add other cards in here this card will start to accumulate some interesting references.  So let’s make a link to the original article, add some tags and get out: 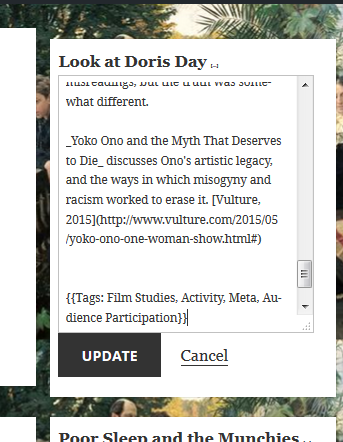 A couple things to note here. We put external links at the end of paragraphs to keep Markdown readable. I used to just put “link” as the link word, but have been playing with other options. The sentence preceding the link should summarize the relevance of the article to the card.

On the tags, I suppose the question you’ll ask is what’s up with putting tags in the text. Well, there are reasons.

The biggest reason is that it’s just easier to add items this way than grabbing the mouse and clicking into a tagging interface, and eventually we can make it so that the tags sync up with the WordPress tag structure on save.

The second reason is I’ve found a need to store arbitrary metadata in documents, and not all documents may have the same backend metadata schema. So I’ve adopted the double-braces as an extension to Markdown signifying metadata. The name of the metadata is preceded by a colon, the value of the metadata is whatever remains after the colon. By default the metadata is displayed in super-small text, but you could extend your system to accommodate specific types of metadata in whatever way you choose. For instance:

This way we can preserve metadata even when our systems might disagree on what counts as usable metadata. 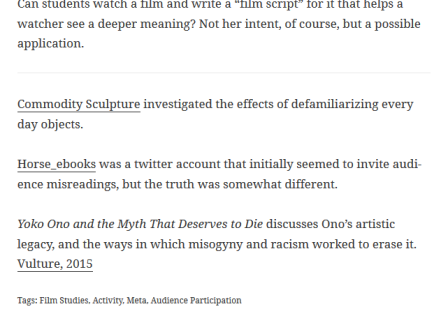 Anyway, that’s how you do it. Your card is now ready to be recombined with others in interesting and generative ways.

It actually takes much longer to explain than to do. Ari has pointed me to some IFTTT scripts that might help make this a reality, so I’ll be looking at those when I get a chance. But seriously, consider freeing your bookmarks — they can be so much more if you let them.

6 thoughts on “Bring Your Bookmarks into the Hypertext Age”