One of the projects I’m working on with French colonial history scholar Susan Peabody this semester at WSU is building a virtual, wiki-based museum with her students in a history course. We’re using a Wikity-based WordPress template to do it, and while we’re not utilizing the forking elements in it, we’re actually finding the Markdown + card-based layout combo to be super easy for the students to master. It’s honestly been encouraging to see that while I still don’t have the forking and subscription in Wikity quite where I want it, it actually makes a kick-ass WordPress wiki. I should probably write about that at some point.

But what I wanted to talk about today was an excellent article Sue shared with me. It’s one she had her students read, and it helped crystallize some of my ambivalence around virtual reality. 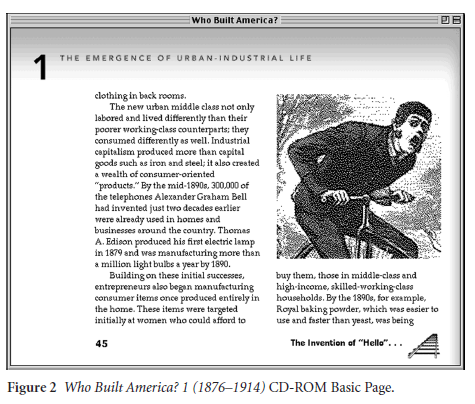 The 2004 article, Forum: history and the Web: From the illustrated newspaper to cyberspace by Joshua Brown describes a series of virtual history projects he co-designed in the 1990s. An early project he worked on for Voyager, Who Built America?, was an enhanced textbook HyperCard stack that included more than twenty times as much supplementary written material as the main narrative text, and, more importantly from the author’s point of view, a host of audio-visual artifacts:

That said, the contrast between the informational capacity of a book compared to a CD-ROM was startling. The original four chapters of the book comprised 226 pages of text, 85 half-tone illustrations and 41 brief documents. The Who Built America? CD-ROM, in addition to chapter pages, contained 5000 pages of documents; 700 images; 75 charts, graphs, maps and games; four-and-a-half hours of voices, sounds and music from the period; and 45 minutes of film.

This led to another project, the George Mason University site History Matters, which did away with the narrative thread altogether in favor of what the author calls a “database” approach.

Having obtained the “immersiveness” of the encyclopedic approach, the author and his co-developers reached for another type of immersion: 3-D environments.

Working in Softimage, a wire-frame 3-D modelling program, and the flexible animation and navigation features offered by Flash, a prototype website called The Lost Museum: Exploring Antebellum Life and Culture (http://www.lostmuseum.cuny.edu) finally went public in 2000. Entering the site (www.lostmuseum.cuny.edu/barnum.html), users encounter the Museum’s main room after the building has closed for the day, where they can engage with its various exhibits and attractions, experiencing its mixture of entertainment and education that would influence popular institutions up to the present (Figure 10).

At the same time, they also can look for evidence pointing to possible causes of the fire that destroyed the building in July 1865. Moving through the American Museum’s different environments and attractions, users search for one of a number of possible ‘arsonists’ who might have set the fire. These suspects represent some of the political organizations and social groups that contended for power, representation and rights in antebellum and Civil War America—for example, abolitionists (anti-slavery activists) and Copperheads (northern supporters of the Civil War Confederacy). In the process of searching for clues that point to these and other suspects, users also learn information about how P. T. Barnum and his museum expressed and exploited the compromises and conflicts of the mid-nineteenth century.

Ultimately, however, Brown felt the work failed in its pedagogical aims. Why? Because in the desire to make the game “immersive” and “seamless” they had also welded the pieces together, not allowing students to make new, unexpected uses of them:

As University of Chicago art historian Barbara Maria Stafford has pointed out, there are actually two types of digital information, or approaches to organizing collections of information: ‘one type lends itself to integration, the other to linkage.’ The distinction, Stafford argues, is crucial. The difference between systematically blending or collapsing individual characteristics (analogous to a seamless, immersive interactive virtual environment like The Lost Museum exploration) and maintaining separate entities that may be connected or rearranged (such as the fragmented multimedia scrapbook) has farreaching repercussions. In the former case, the immersive, its ‘operations have become amalgamated and thus covert’, preventing users ‘from perceiving how combinations have been artificially contrived’, while the latter is ‘an assemblage whose man-made gatherings remain overt, and so available for public scrutiny’. In Stafford’s estimation, the immersive fosters passive spectatorship while the assemblage promotes active looking (Stafford 1997, p. 73).

And ultimately this is a problem that is acutely felt in 3-D environments: the pieces of the environment and the way they react to the participant gain their immersive quality only by being parts of a coherent whole that can’t be broken down into its constituent parts.

I don’t mean to imply that these issues couldn’t be overcome, to some extent, by brilliant design or user persistence. The many uses that Minecraft has been put to amaze me, for instance.

But Minecraft is not, I think, what the people promoting VR to teachers have in mind. The pitch most often involves exactly the type of locked-down virtual environments that invite inspection but resist deconstruction and rearrangement.

Something to think about as we hand out all those Google Cardboard glasses for virtual field trips, no?