So, imposing on people I knew across the intertubes, I decided to put together an experiment called Fedwiki Happening #1. Initially I tried to only invite 15 people (making sure to pull from a worldwide group — I really do take the U.S.-centric critique seriously). The idea was a 14 day uncourse (Dec 17 to Jan 1) that would set very small open assignments (Connect two articles! Fork an article you like!) around a task of “idea-mining”, a cycle of daily discovery and connection I’ve become convinced is a core application of the technology. It ended up ballooning to about 36 people as a number of people asked to be involved.

We started on Wednesday. And already I have the sense of something big here. Here’s a segment of the Recent Changes, about a quarter of a day’s activity: 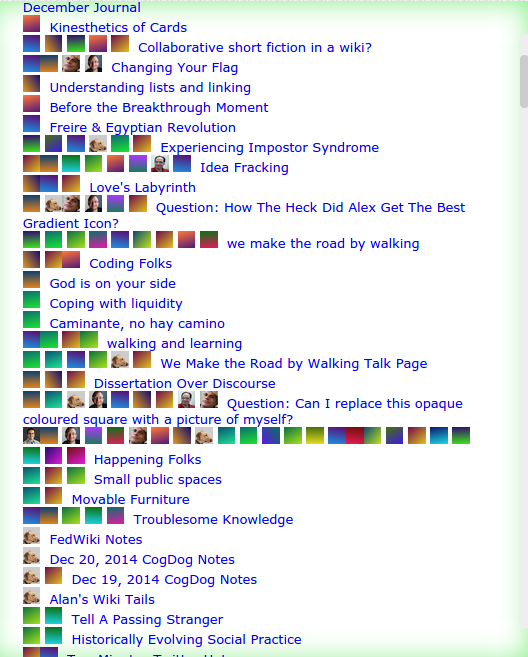 Each separate icon (whether color or photo) represents a person forking a page and making an edit; joined icons indicate a fork without an edit (which is halfway between a “like” and a bookmarking action.

Participant Alan probably captures the process a number of us are following as well any anyone in Federated Index Cards, and it’s well worth reading his take.  (There are of course other approaches, from writing collaborative fiction to co-authoring more formal academic pieces, all of which I watch with intense interest).

It’s a process I followed for a number of months while experimenting with the form, and then invited Ward to try with me in a six week experiment. You go about your day, read what you normally read, think what you normally think. But rather than posting links to these things on Twitter or Diigo, you drill down to what the connectable *idea* of the thing is.

Why? Because the problem I am trying to solve is I want to help “the right ideas find each other”. Those ideas could be two of my own ideas that I don’t realize are connected. The could also be an idea I have and one someone else in Bangalore has. Or my idea and your examples. Etc.

But what’s really cool, and what I’ve gotten to experience firsthand, is the joy of connecting *other* people’s ideas, of being what is called a “broker” in social network analysis.

Here’s an example of that.  First Kate puts up an article on Small Public Spaces. 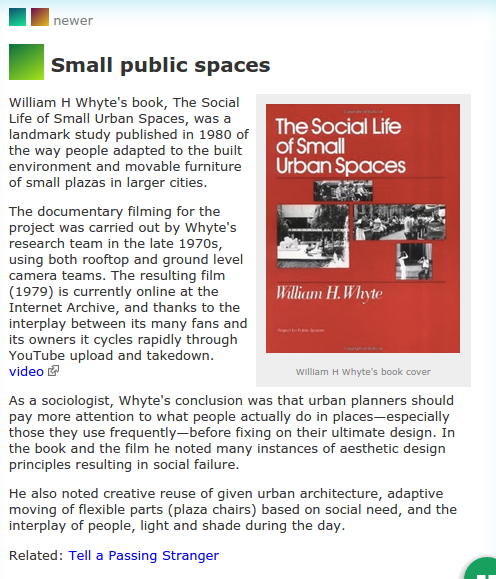 As Alan notes, it’s like filling out an index card. And it’s not that it’s an *idea* exactly — it’s that this thing here, this thought about how Whyte approached the design of public spaces — it’s “a good tool to think with”.  You can see throwing that idea (or example, or data, or whatnot) into the mix of a future discussion, and it helping to deepen that discussion.

I’ve read about Whyte before, but this prompts me to search YouTube for a video of some of Whyte’s observations. I find one on movable chairs, and watch it. It’s super cool, showing how people reposition movable chairs in plazas to deal with needs of the moment, and sometimes move them just to feel empowered.

Looking at Kate’s article, I link the term Movable Furniture to to a new page I’ll create with that video on it:

But as I’m writing up the page Movable Furniture, I’m reminded of something else I recently read in the federation — David Jones had written two pieces, one on the idea of needing students to be Digital Renovators — people who feel empowered to alter their digital environments, and a related idea of the Concrete Lounge — the digital environment that is impossible to customize. Watching the video and seeing how much people rearrange chairs when they get the chance, I just can’t help but see this as related. 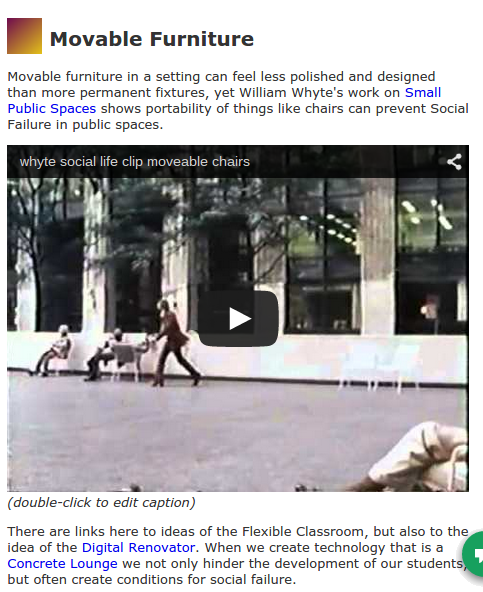 And now, if you click that Concrete Lounge link you get what I think is a very relevant connection to Whyte’s work: 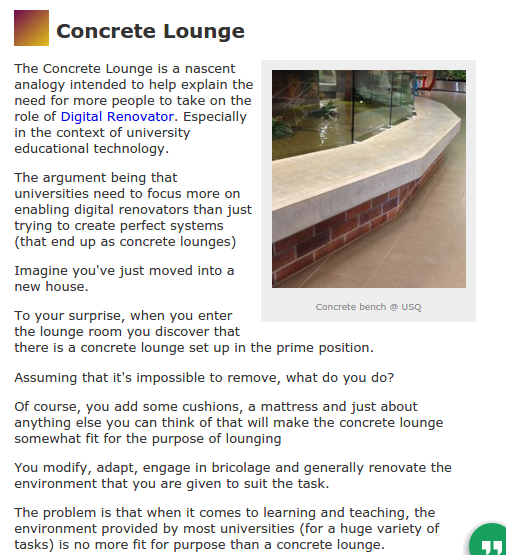 Maybe. I’d be curious to know. But even in the case they had both known about these connections, these connections are now there for *anyone* to follow. The next person who ends up on the Small Public Spaces side of the equation can follow it to the Concrete Lounge, and vice versa.

You could connect other things — data to theories, examples to patterns. Data to data. If you imagine a universe of people doing this rather than forwarding article and video links around, you start, I think, to get to a vision of the web more in line with early conceptions of what the web might be.

And of course, it’s very like wiki, but it’s not in this one, super-important way: there is no permanent community. The wiki is implemented as a network, where the people Alan follows will overlap with some of the people I follow, but never so much that the community is self-contained. As federated wiki expands, the network might start to look more like Twitter in terms of how information flows fluidly through through multiple sub-networks, but more like wiki terms of how that information is treated. Ideas could flow through log chains of people unaware of each other’s existence, reaching unpredictable yet fitting destinations.

Of course, there are other models of use as well, some of them emerging on the site as we speak, and we watch this closely. After playing with (and thinking about) the software for eight months, it’s really this piece that most excites me at the moment, the possibility of a new culture of connection, where we solve one of the most pressing problems of today — how to get the right ideas, data, and examples to meet.

For now, the software may be buggy, the users may be new to the environment, the learning curve may be difficult. But we’re starting to see the outline of something strange and new. And I like it.