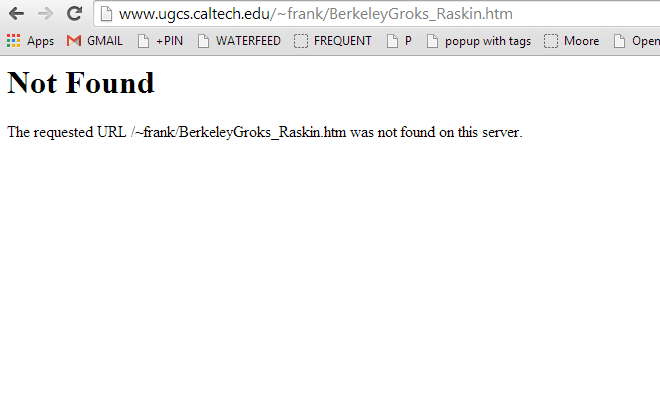 Just now I clicked on link to an article  on Jef Raskin (designer of the Macintosh interface) and received the above result. The article was an interview with him just before he died in 2005, and I was interested on his take on modern interface.

Of course, my head goes straight to the idea of federated wiki. In federated wiki people are encouraged to fork your stuff to their own server. Read something you like? Fork it.

Getting your stuff forked is a good recipe for for making it more durable over time. If you disappear, your articles won’t. It’s kind of like 1960s psychedelic pop singles — all these bands that made just a record or two disappeared, but their music is still accessible to us because hundreds of people bought those albums and stored them in their record collection. Later on, 1980s compilations such as Rubble pulled those yard sale records together, and published compilation records that went out, again, to thousands of houses into their personal collections.

And it’s that reason why we haven’t lost short-run 45 rpm gems like The Factory’s “Red Chalk Hill”:

Whereas on the other hand an interview written up a few years ago and posted on the internet is gone forever.

Ephemerality can be cool. It’s not always a bad thing. But in general I’d like my blog articles to have a life after I shut down the server, and my music to have a life after last.fm goes under. If either thing happens it’s likely to be the people who copied them who made that happen, not me.