I’ve known (ever since my own short stint in higher education marketing) that the demographics of the U.S. are a bit dismal from here on out. The situation, which I’ve jokingly referred to as “Peak Demo”, is that most growth in higher education has been funded by the 17-24 year old set, and that demographic starts stabilizing (and actually shrinking slightly) from here on out, as the so-called “echo-boomers” move into their late-20s and early 30s. Somewhere in the mid-aughts was peak demo. We’ll bottom out around 2020, and, barring international students and changes in immigration law, we won’t get back to 2005/6 levels until around 2030.

(From the excellent stats site NationMaster)

That has really ugly implications for higher education institutions, which used the echo-boom years to expand, rather than transform (Oops!). It means that transformation now has to be accomplished while being run down by the three horsemen of the edu-pocalypse: Baumol’s cost disease, rising medical cost demands on GDP (with attendant declines in state support), and, now, lousy demographics to boot.

All this is old hat. What I didn’t realize until a tweet by Scott Leslie (to Brian Lamb, who is doing his own stint in marketing) is the demographic situation in Canada is even more dire: 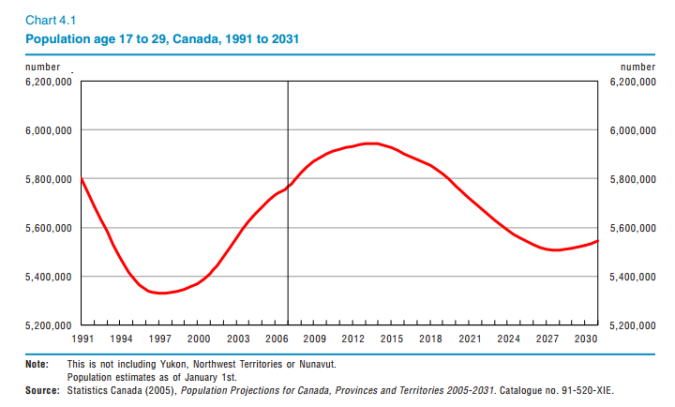 Wow. And of course, there’s Western Europe, which has been imploding for a while (but maybe has the advantage of having not expanded during an echo boom):

No real poignant observation here, just interesting to see this issue outside the U.S.-centric context.

(and, yes, if you are Kenya, it’s a whole different ball game)

6 thoughts on “Peak Demo is Real”