I haven’t seen this graph referenced in the recent discussion around Blackboard’s latest purchase, which is strange, because it explains almost everything: 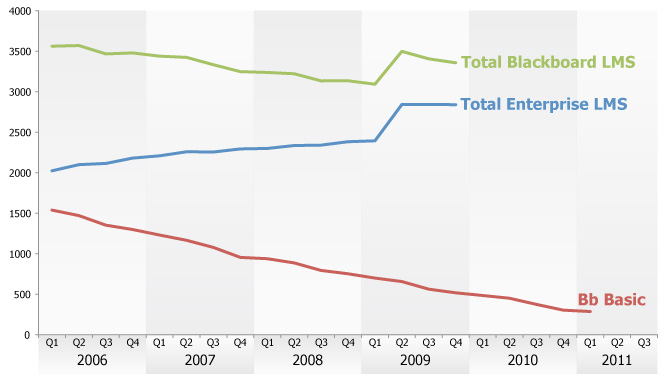 A while back, Blackboard decided that the saturation and commodification of the LMS market meant that the path to greater profitability was not more contracts, but a higher average contract price. Under such a model, Blackboard Basic was seen as cannibalizing potential sales of the enterprise product, and they began running a series of special offers to move people off of the basic product and into the enterprise one. And they were successful to a point. In the data we have, enterprise licenses increase, and total licenses fall slightly, indicating that at least initially the higher contracts may have offset customer loss (though even this is debatable given the deals they ran for upgrades, and the percentage of that bump that is really the Angel acquisition).

We can’t tell what happened after that, though, since Bb has not released data on licensing. The best estimate I’ve seen indicates that Bb lost between 150-400 licenses a year from 2009 through 2011.

That’s a problem for Blackboard, and not just because of the loss of core LMS revenue. Why? Because Blackboard sees the future of contracts as selling add-on modules and other higher education services. Take a look at their front page:

The Learn product is placed first, but the message is clear — the transaction system, analytics system, and campus messaging system are products in their own right. And the future is selling these products — if you don’t believe me, just look at these figures Michael Feldstein put together a couple years back: 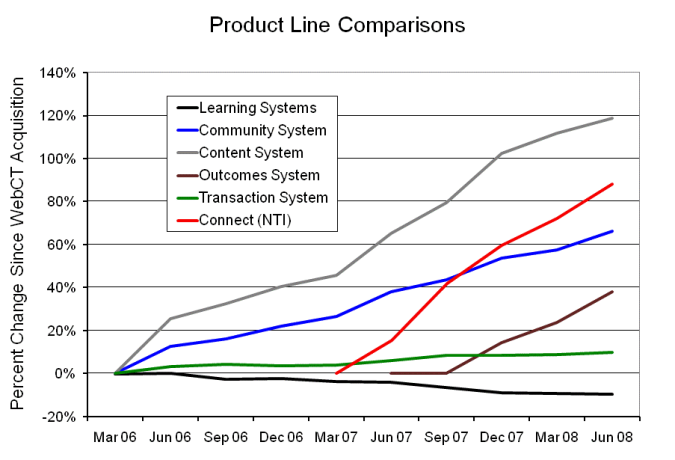 I’m sorry this is out of date — since Blackboard went private in 2011, there has not been much data released about such matters, so we have to rely on old snapshots.  But the idea here is clear:

The purchase of ANGEL and WebCT were not about winning the “LMS wars”. Blackboard sees the LMS at this point as a commodity product. The purchases were about getting a seat at the table to sell other more profitable products: analytics, collaboration add-ons, early warning systems, financial transaction systems. Compared to the LMS, the price to support cost of an analytics,  transaction, or emergency communication system is a dream. The LMS, on the other hand, is a headache — high support, low-margin. But it’s a perfect foot in the door to make other sales.

There was only one problem with this — as Blackboard acquired more customers via purchases of WebCT and Angel, they realized there was a leak — Moodle. Customers that were gained through acquisition were moving to Moodle, and current customers pressured into the enterprise product were also bailing.

Buying Moodlerooms plugs that leak, and keeps Blackboard at the table selling the more profitable building access, commerce,   human resources, and donor management systems that they make their money on. 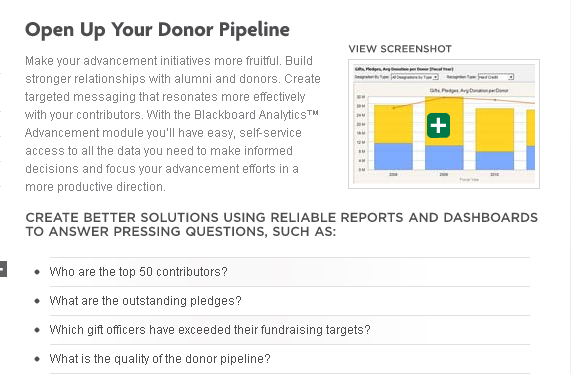 What Moodle is to Blackboard is a way to keep a foot in the door of the more price-sensitive customers while not cannibalizing sales of Learn.  Ultimately, this allows them to maximize profit on the LMS side while staunching the customer bleed they have been experiencing the past three years. And this preserves what has been their planned path for a while — to move beyond what they see as a dead LMS market and into more profitable products in less saturated areas.

Blackboard bought Moodlerooms for the same reason it bought Angel and WebCT: it’s not an LMS company anymore. It’s really that simple.

4 thoughts on “Blackboard, Moodle, and the Commodity LMS”