Secretary of Education Urges Colleges to Rein In Costs 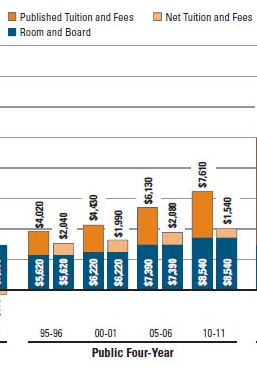 It’s easy to believe that the student protests against tuition, at least at the state colleges, might at least stall the tumble of state appropriations.

I think it’s unlikely. In fact, I think the net effect of the tuition protests will be a crackdown on college cost, not to the student, but to the taxpayer. And the recent statements of Arne Duncan seem to confirm that’s the game plan at the federal level.

It doesn’t matter that U.S. students, on average, might pay less for college tuition than they did ten years or even fifteen years ago. To the extent that’s true, it’s made possible by a government subsidy — one which is hitting it’s ceiling. Add to that the gray wave that will eventually defund education and the direction is set.

So if you are cheering on student protests because they show a generation finally willing to take control of their political destiny, keep cheering. I am too.

But if you think the net result will be a greater and more equitable funding of education, think again. That student momentum has already been jiu-jistu’d back at us, and it is just going to get uglier from here on out.