Professor Walter Lewin’s classes (above) have been viewed by millions of people on cable TV and downloaded by millions via OCW. In them, Walter demonstrates the best of breed in demonstration-based physics. If you don’t believe me that it’s best of breed, just watch the video above. He’s really top of craft in this style of physics presentation.

But does this style of physics presentation actually work? Eric Mazur claims it doesn’t, and in fact claims that such demos may perform worse than straight lecture in terms of helping to produce learning gains. Such demonstrations may actively work against student understanding.

I’m sure there will be people that complain that Mazur’s research is too simple, or not relevant, etc. Sure. But this problem indicates my frustration with the “We just make this stuff, and what happens, happens” school of OER. Mazur brings little data, but the OER sponsors of such projects bring none. Where is the accountability in these projects? My thought is that Physics OCW/OER should be judged by how well it helps students learn physics. Is that odd?

Maybe students watching Walter’s lectures do considerably better than those just reading a textbook and working problems. Maybe they do significantly worse. Whatever the case, given the fact we are ten years into this thing it seems like something we should have bothered to find out.

I wrote a long defense of nyms just now, and I realized about halfway through it that I had completely skipped over the problem of spamonyms.

So let me say one thing in defense of a real names policy — if Google could couple it with a real effort to cut down on spamonyms (those fake accounts that are used pollute the internet with spam) I’d be more sympathetic.

I don’t think that’s what this is about though, or where it’s going.

Well, not quite. But this from Mazur is pretty depressing (though thoroughly expected if you read the literature on this sort of thing): 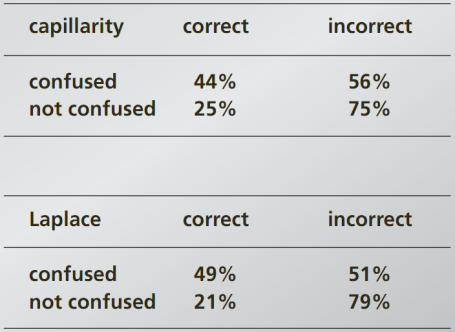 These are two concepts from physics, and as you can see the students who say they were confused on a concept score significantly higher than the students that say they are not confused.

Third finding: Students praise teachers who give clear lectures, who reduce confusion. Student evaluations of teaching reward that clarity. Students prefer not to be confused.

Is that always a good thing? Mazur tried an on-line test on several topics, where he asked students a couple of hard questions (novel situations, things they hadn’t faced previously), and then a meta-question, “Did you know what you were doing on those questions?” Mazur and his colleagues then coded that last question for “confusion” or “no confusion,” and compared that to performance on the first two problems.

Confused students are far more likely to actually understand. It’s better for students to be confused, because it means that they’re trying to make sense of it all. I asked Mazur if he knew about the other direction: If a student says they know something, do they really? He said that they tried that experiment, and the answer is that students’ self-reported knowledge has no predictive ability for their actual performance. Students really don’t know if they understand something or not — their self-report is just noise.

You probably want to ask students if they felt a professor was fair, and treated them with respect. If they made themselves available, and returned work on time.

It’s pretty much useless to ask students how much they learned though. For that you need a pre and post test or a well-structured performance task.

As far as the marketing angle of whether the students *feel* like they are learning, I’d actually market it it the other way — show *them* the pre and post test results against a good comparator — teach them what real learning looks like. Or in the case they didn’t learn anything, what it *doesn’t* look like.

Learning is often not the sort of experience we often think it is, and helping students to understand the disorientation of truly pushing into new understanding is perhaps one of the greatest gifts we can give them.

(via, as usual Downes)

The great body of physical science, a great deal of the essential fact of financial science, and endless social and political problems are only accessible and only thinkable to those who have had a sound training in mathematical analysis, and the time may not be very remote when it will be understood that for complete initiation as an efficient citizen of one of the new great complex worldwide States that are now developing, it is as necessary to be able to compute, to think in averages and maxima and minima, as it is now to be able to read and write.
H G Wells, Mankind in the Making (1903)

In math, what we need is “quantitative literacy,” the ability to make quantitative connections whenever life requires (as when we are confronted with conflicting medical test results but need to decide whether to undergo a further procedure) and “mathematical modeling,” the ability to move practically between everyday problems and mathematical formulations (as when we decide whether it is better to buy or lease a new car).

The authors are exactly right, of course. It remains amazing to me that people justify geometry as a core skill because you can use it to measure the size of your lawn(!!) or to cut boards for a table(!!). And Trig is important because the average person can use it to — well, what?

Here’s the sorts of things *I* consider compelling cases for math literacy:

The majority of college graduates can do none of these things. The majority of college graduates, in fact, do not understand that the probability of being a person with cancer is greater than the probability of being a smoker that has cancer, or even that most raw numbers mean nothing (24 moped accidents this year in the state! Mopeds are dangerous!).

And virtually no one understands why a prostate test of at risk men over 50 is more accurate than a test of all men over 40. (For a recent and topical example, see the great mammogram debate).

Start keeping track of where you encounter numbers, and where they matter to your decision making. I guarantee you that most of the numbers you meet in a day are simple statistics, and what you need to understand them in a background in reading statistics critically. I guarantee you you will hear at least one statistic today that requires analysis.

The algebra people will tell you alegbra is important because you can use it to wire your house(!!).

Hire an electrician. You have more important things to focus on.

This is part of what drives me crazy about debates around charter schools and “choice” in the United States. Every prosperous family in the Washington, DC metro area is exercising public school choice when they decide where to live.
Matthew Yglesias

We Need A Taxonomy Of MOOCs

In any case I like terms that Downes calls attention to today, but rather than find the perfect acronym for MOOCs I’d prefer to see a few well-considered additional terms appear.  The idea of a taxonomy that includes SOOCs (like the Stanford class) and MILEs (like Connectivism and ds106) is attractive to me, for example.

Why does it matter? Because I think there is a place for a variety of experience in this realm, and I would hate to see us get all wrapped up in weird litmus tests for MOOC-ishness. And to do that we need a slighly more expansive typology so that we can all stop complaining that horses aren’t giraffes and that giraffes are not sea turtles.

But I’ve often found the visionary books to be detached from reality to some extent — proposing courses of actions that show an illiteracy of how colleges actually operate and the multiple functions they serve. And I’ve found that people that write about the system from the inside, the people that do get how change is made in higher ed often suffer from a really reduced sense of the possibilities.

This is maybe the first visionary book that I feel actually grapples with higher education as it actually exists. And it does it by making sense of how universities and colleges act, instead of just throwing up its (metaphorical book) hands and declaring higher ed insane, or greedy, or both.

Not exactly breaking news, but she was one of the few people using people using G+ the way I hoped people would grow to use it, as a sort of cross between twitter and blogging. And she’s quit doing it because of some unnamed unpleasantness.

It’s bad for me, because I enjoyed her posts. But I’m more curious what the reason was, e.g. did it result from some weirdness that comes from using G+ in that way? Scoble (in a comment on her post) seems to indicate it is something to do with a “chat room problem” that Google needs to fix….

I know you’ve all been waiting with bated breath for the hashtag to be announced.

Yeah, it sounds like someone coughing up a furball…

…but it’s short, and we want you all to have the characters you need. Tune in!